A selection of graduates from the Parsons School of Design BFA programme 2017 showcased their final collections at Pier 60 in New York earlier this week.

The designers showed both menswear and womenswear, although many pieces were not designed for a specific gender – a common theme in fashion of late.

Here's six of our favourite collections from the show:

After noticing a surplus of clothing in her own wardrobe and many others, Jiwon Choi decided to design garments that could be worn in different ways to cut down this excess.

"I wanted to highlight the waste and overconsumption in our modern society with graphic symbolism and construction, and offer a solution with multifunctional clothing that would reduce the need for more items in our closets," he told Dezeen.

The result is a series of colourful garments vaguely reminiscent of Samurai armour, which feature stripes that can be pulled and tightened to alter the silhouettes.

"I started each garment with a stripe, and I built upon that one stripe repeatedly to represent overconsumption in our society," Choi said.

Wheat grass grows from the neutral-toned organic material that Jacob Olmedo has turned into clothing, creating a trio of wearable gardens.

"I engineered a hydroponic growing textile: a textile that supports and promotes plant life," he told Dezeen. "I see these as three conceptual pieces that act as environmental armour."

The material he developed combines layers of beeswax for waterproofing, a blend of fibres that holds moisture, then wood pulp that holds the seeds and stores the nutrients needed for the plants to flourish.

"I use a material that I engineered through months of research and technical trial and error," the designer said. "I ended up growing wheat grass, but I can also grow micro greens and I would ultimately one day like to grow flowers."

A model for Alexa Wan Yu Chia wore a laser-cut plexiglass panel etched with the suggestion of a denim jacket, based on digital scans of garments, strung around his neck.

The designer's other materials included translucent vinyls and polyurethanes that were similarly patterned and layered to create a sense of progression and change.

"My focus was on this idea of preservation and sacredness of the physical form," she said.

"I wanted the attention to be kept on the materiality, without the distraction of colour, for these textiles to be viewed in their purest form."

Influences for Min Kyung Kim's collection came from the 1980s Memphis design movement that has recently seen a resurgence in popularity, as well as the vivid imaginations of children.

"I created my own Memphis design by deconstruction garments combining colours and mood of my childhood visualisations and finding a new system of designing," Kim said.

"Just like how little children obscurely wear clothes, I designed my garments in the same manner, such as by putting your head through the armhole, taking out your hands from the collar and wearing the sleeve as you would wear a pant," she said.

Linen, cotton and wool were among the natural fabrics used by Sijia Wu to create a series of floaty, earth-toned pieces with frayed elements trailing across.

"Fraying techniques created a raw, falling and fading away illusion for the delicately connected broken suit," the designer told Dezeen.

Wu also created a series of paintings to accompany the collection, as well as ceramic vessels that were carried by models during the show.

"The colour palette is inspired by the process of making ceramics," she said. "From neutral, raw and clean colours of the clay, getting gradually darker during making, and the experience of the firing process."

The chaos of a disorganised room with clothes all over the floor influenced Myung Eun Cha to combine different materials and silhouettes into her garments.

"[My] Alluring Disarray collection definitely shows my habit, my personalities, my room, and my aesthetics," Cha told Dezeen. "This is for myself and other women to get over shyness and embarrassment not to show my and their personal space due to disorganised belongings."

Standout pieces include a padded white sweater with one giant arm, as well as the accompanying geometric metal-framed eyewear.

"I tried to combine architectural shapes with natural fluidity, by mixing hard materials with soft ones or by attaching interfacing a couple of times in order to make an angular shape with soft material such as knit fabric." 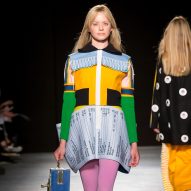 Photography is by JP Yim.