The runway show, presented at the Lycée Carnot as part of Paris Fashion Week, was called Making Speaking, Speaking Making.

Kondo, who took over as head designer of Issey Miyake in 2019, said this collection explored how the naive joy of engaging the senses with colour and tactility could "connect beyond languages and cultures by the feelings we share".

Two of the models walked onto the runway in shimmering bodysuits made from gauzy fabric folded in intricate origami patterns. The silky body suits created flowing movements as the models raised their arms and wafted around each other.

The show opened with a sheet of paper stretched across the back wall, with a single stylised figure outlined in thick black pen drawn in the middle.

Two assistants walked on and drew two more figures either side of the central one. Assistants then cut around the lines to leave a trio of person-size cutouts.

Models wearing white structured garments with black outlines stepped into the gaps, like 2D drawings of clothing come to life.

Kondo made these outfits using a system called A-POC, or A Piece Of Cloth, which uses computer programming to produce each item from a single bit of fabric.

Model wore a series of down outfits that can be transformed using zips in cherry red and sunshine yellow.

Made from fine nylon yard, trousers could be unzipped partially to create knee vents or have the lower parts removed entirely to turn them into shorts. A long coat unzips horizontally to make a shorter jacket, and features removable sleeves.

The show closed with pairs and groups of models coming out in pieces of knitwear that were joined at the head, arm or hips.

Called Hand in Hand, a seamless knitting technique was used to create continuous knits with multiple openings for heads and limbs. 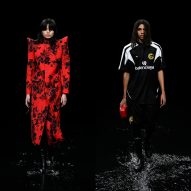 Dresses, jumpers and hats connected with scarf-like tubes connected the models.  Some of the creations were complete with blocks of colour.

The looks were all paired with chunky-soled black, grey or taupe booties.