Chinese studio Bentu Design collected leftover tiles and crushed them to create its Ceramics Made collection of speckled terrazzo-style furniture and lighting.

The pieces, which were unveiled during Milan design week in April, are designed as a more sustainable use of some of the 4 million tonnes of ceramic waste that comes out of China's Foshan city.

The area is home to a large amount of the world's ceramics production, which generates leftover materials that are often transferred to and dumped in remote villages.

"Not only is the cost of disposal high, but the non-degradable materials can also not be digested by nature, hence occupy the land, affect the growth of vegetation and even pollute the water," said Bentu Design, which is based in Shenzhen.

"Ceramics Made is a material regeneration experiment using wasted ceramics tiles to make terrazzo, so that the waste materials can be put back into use for the general public and become everyday furniture that can be produced in a large scale."

The studio mixed the pieces of tiles with concrete, which was later polished to a smooth finish. It is cast in slim panels to keep the furniture lightweight.

Bentu Design further reduced the weight of the pieces by creating a base with a grid-like structure, that's covered in the terrazzo.

The studio was able to create dark and light versions of the speckled material, and use it for everything from long benches, shelves and tables to brick-like outdoor lamps and pendant lights shaped like flying saucers.

"Blending material regeneration into day-to-day-lives is not only a bold attempt to stimulate the commercial value and practice of merging environmental protection into our lives, but also the basic adherence to and pursuit of one's dignity," added the studio.

Bentu Design was set up in 2012, with a focus on finding new ways of using leftover materials. It has previously released bamboo and concrete pendants, and experimented with combining concrete and different kinds of waste.

Terrazzo has experienced something of a revival of late, particularly in the world of homeware. Furniture company Another Brand used it in a set of pedestal tables, while Italian designer Alberto Bellamoli designed pieces covered in oversized polka dot-style spots of marble.

Other designers making the most of waste materials include Nienke Hoogvliet, who used reclaimed toilet paper for a set of bowls and tables, and Brodie Neill who similarly created a terrazzo effect using fragments of ocean plastic. 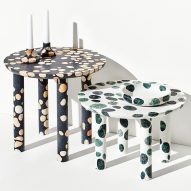