Terrazzo, which is made from scraps of marble, has been used for centuries as a construction and finish material in buildings – most commonly flooring – thanks to its durability.

But a number of recent products have taken the material out of its usual context, like Besler & Sons' wedge-shaped home accessories, and the collection of speckle-topped tables Simon Legald created for Normann Copenhagen.

Bellamoli's take on terrazzo is distinguished by its large hunks of inlaid marble, which are so rounded as to look like dots. He has used two different colour combinations – a white base with marble spots in hues of green, and a darker base speckled with beige.

Bellamoli, who is based in Denmark, returned to his hometown near Verona, Italy to experiment with composition and design for the homeware series, aiming to give what the locals describe as "poor man's marble" a new use.

He combined these with a terrazzo mixture of smaller marble chips, granite and concrete to create a large block, which he left to set and age for one month.

After curing, Bellamoli sliced the hardened​ ​terrazzo blocks into different thicknesses before using a CNC machine to shape the different homewares.

"I worked with one of the oldest marble chip suppliers in Italy to create super round pebbles of marble," the designer told Dezeen. "After that, I found the combination of terrazzo mixture and marble pebbles."

"I cast a big block of terrazzo, and let it age for one month with the right conditions of humidity and temperature, almost like a handcrafted Italian salami."

He finished the process by hand, polishing the pieces to reveal the different patterns created by the stones.

Other recent applications of terrazzo have included a camouflaged furniture installation by Max Lamb and inside a Singapore restaurant by Barber and Osgerby's Universal Design Studio.

Collecta was on display at IMM Cologne, which took place from 16 to 22 January 2017. Other products that launched at this year's event include mirrors by Meike Harde that sit askew in their frames, a hybrid bed-desk by Pieter Peulen and a copper clock by Patrick Palcic that uses perfume to tell time. 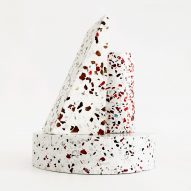