Dezeen promotion: design company Luminaire is set to host an exhibition of work by designer Antonio Citterio during this year's NeoCon in Chicago.

Luminaire's month-long exhibition will open on Tuesday 13 June to coincide with the NeoCon furniture trade show in Chicago, which runs from 12 to 14 June 2017.

Located at the Luminaire Chicago Showroom, it will showcase the products that architect and designer Citterio has created for a range of brands, including B&B Italia, Vitra and Flos. These will be accompanied by multi-media presentations that explain his design approach.

"Antonio Citterio's design philosophy has always been focused on a method, not a style," said Luminaire.

"The metamorphosis of an idea or an intention, into a project or a product, takes place by means of the alchemy that is the relationship between him as an architect or designer and the client."

Among products featured in the exhibition is the 2003 curved Mart lounge chair and the L-shaped Charles Sofa, both designed for B&B Italia.

Furniture for Vitra will include the AC4 Task Chairs, office swivel chairs and the Grand Repos Armchair – a swivel-base lounge chair.

The Kelvin LED Lighting, which Citterio designed for Flos in 2009, and the ABC Lounge Chair created for Flexform in 1996 will also be on show.

As well as furniture, the exhibition will feature bathroom fixtures, a table trolley and the Personal collection of design-focused gym equipment for Technogym.

Just before the exhibition opens, Citterio will host a lecture during which he will share insights about architecture and design.

The lecture will take place at 6pm at the Museum of Contemporary Art Chicago. The exhibition will open on Tuesday 13 June 2017, and will remain on show for one month in the Luminaire Chicago Showroom on 301 West Superior St.

During NeoCon, Luminaire will also showcase a lighting installation of Bocci's 87 Series pendant, designed by its creative director Omer Arbel.

The lighting, which is made from stretched loops of pearlescent glass, will be clustered together to create a "matrix of stretched and folded glass".

Antonio Citterio was awarded industrial design award Compasso d'Oro Award in 1987 and 1995. His products are part of New York's Museum of Modern Art's permanent collection and the Centre Pompidou in Paris.

Last year, he was tapped to conceive a luxury residential building in Miami Beach, marking his first architectural project in America. 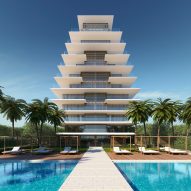