Toland, a graduate of Central Saint Martins' bachelor's course in Product Design, initiated the mCycle project as her "own personal response to tampon tax".

Named mCycle, the company would work in a similar way to British online food delivery company Deliveroo. Tampons are couriered via bicycle in a cardboard package, which then transforms into a sanitary bin.

Once the user's menstrual cycle has finished, they seal the box so that it can be picked up, before it is turned into compost for places such as football fields and parks.

"Think Deliveroo for tampons," Toland told Dezeen. "I wanted to create a brand that normalised menstruation. Not so much a protest but as a rational step towards better menstrual care."

"I also wanted to look at menstruation as a resource that can be composted rather than feeling ashamed of it, wrapping it in three layers of plastic then flushing it down the toilet."

Sponsored by The Ellen MacArthur Foundation – a charity that champions a circular economy – Toland created a prototype of the delivery box, but was keen to avoid the typical design of tampon packaging.

"Why is tampon packaging never red?" she said. "I wanted to use the word menstruation and the colour red, and illustrations of blood drops for the main logo."

The service would also include an add-on that connects to the user's regular menstrual tracking app, meaning that deliveries can sync with cycle predictions. There would also be an emergency service for unforeseen deliveries.

She envisages mCycle functioning as a co-operative company, with users buying shares into the business when they purchase their products.

"You can take your share of profits at the end of the financial year, or become a mCycle lifer and save up your profits until menopause – a period retirement fund!" she said. 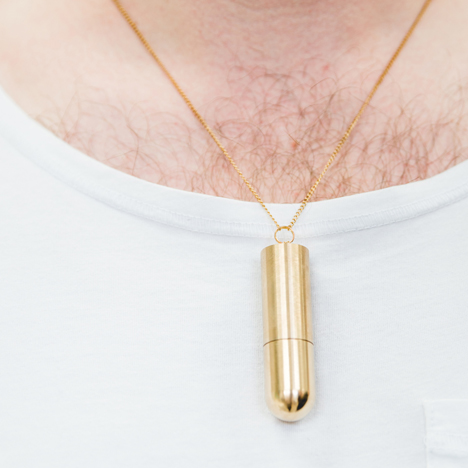 The Flex Company designed a tampon that allows women to experience "mess-free" sex during their periods, while Swedish designer Katarina Hornwall created a necklace pendant that can be used to carry emergency tampons.