Dutch designer Jólan van der Wiel has created a water-filled seat made of dozens of pipes that store and circulate raindrops.

The piece is part of his Tropic City collection of furniture and homeware, which has all been designed with the challenges of tropical climates in mind. Van der Wiel tailored the bench to extreme environments, particularly places that suffer from periods of drought.

"You need to create possibilities to store the water when there is a lot of rain and release it when there isn't enough of it," the designer told Dezeen. "So why not incorporate this idea in our habitat in a visually attractive way?"

Van der Wiel carried out several experiments to perfect the seating – which was created in partnership with Benthem Crouwel Architects – with the aim of creating a "pure and beautiful" system that would somehow resemble natural processes.

"The water bench captures the water in Perspex tubes so it doesn't evaporate," added the designer. "With the use of air pressure, I created a dynamic surface that reminds me of natural sap circulation."

Many of the other pieces in van der Wiel's Tropic City series take inspiration from tropical forests themselves – particularly the prickly skin and bright colours of fruits and insects. The huge leaves and trees often found in rainforests were also a reference, with the designer borrowing their forms for a pair of entwined, plant-like floor lamps.

There is also another chair, made up of 20,000 coloured tubes melted together to allow water to run through.

"I was thinking of how heavy tropical rain showers are and how I wanted to create a piece of furniture that would be equipped to deal with these," said van der Wiel. "Individually the tubes are light and thin, yet collectively they create a strong surface with enough volume to sit on."

A spiky console table uses a technique the designer developed several years ago, which relies on magnetism to shape objects. Van der Wiel referenced the defensive spikes of animals to create legs that provide protective barriers to the tabletop – safeguarding whatever is placed there.

To showcase the pieces, the Dutch designer created an installation for Amsterdam's National Maritime Museum, using sounds and temperature to produce an artificial tropical environment. Alongside the exhibition, which was shown in March, van der Wiel worked with the museum to organise a series of lectures and debates around climate change.

The Tropic City pieces are part of an ongoing series van der Wiel has named Odd Environments, which will see him spend the next year designing pieces that reflect different natural forces and laws.

The designer, who set up his own multidisciplinary studio in Amsterdam in 2011, is known for experimenting with unusual forms, often shaped by magnets and gravity. He used the process to design both prickly shoes and dresses for Dutch fashion designer Iris van Herpen and a candleholder created using iron filings. 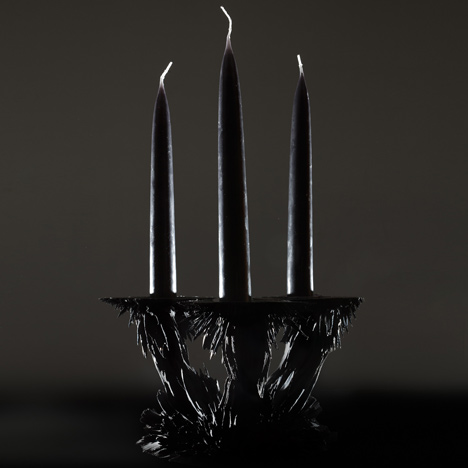