For his Magnetism Meets Architecture project, Jólan van der Wiel created a series of ceramic objects using a process that exploits the conflicting properties of natural materials and processes.

He starts by adding water to clay to create slip – a suspension of clay particles in water with the consistency of cream. 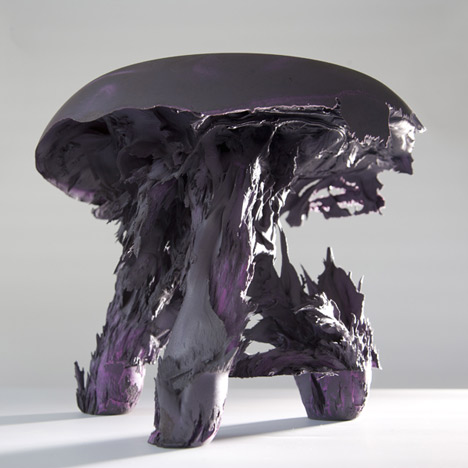 More commonly used for decorating ceramic objects, slip's liquid state means a mould would usually be required to construct something from it.

The designer mixes in metal powder to make the slip magnetic. It is then applied onto a rotating surface and slowly built up using a nozzle.

Passing a magnetic field through the material provides an opposing force to gravity. The counter force draws the slip upwards and suspends it in place as it dries and hardens.

"Gaudi's small model of La Sagrada Familia was quite inspiring for this project," Van der Wiel told Dezeen. "He used gravity to calculate the final shape of the building. I thought, 'What if he had to power the turn off the gravitational field for a while?' Then he could have made the building straight up."

The project is part of ongoing research into the applications of magnetic forces, which Van der Wiel conducted at the European Ceramic Workcentre in Den Bosch.

After discovering that clay could be shaped by magnetism, he is now exploring applications for the technique in architecture.

"The idea of creating buildings with magnetic field has always fascinated me," said Van der Wiel. "I'm drawn to the idea that the force would make the final design of the building – architects would only have to think about the rough shape and a natural force would do the rest."

"This would create a totally different architectural field," he added. "These are the very first models showing how future buildings and objects could look when they are shaped by natural forces."

His first experiments resulted in a series of stools and he has since worked with fashion designer Iris van Herpen to create dresses in the same way.

Photography is by Raw Color.