It's 10 years today since the revolutionary Apple iPhone first went on sale. But a decade on, is the product losing its appeal? We've collated the best iPhone-related comments from Dezeen readers for a comments update special. With a mix of snark and insight, they document the product's changing reputation.

When Apple revealed the iPhone 7 in September last year, there was one feature – or lack thereof – that grabbed everyone's attention: the company had eliminated the headphone jack and introduced new wireless headphones, called AirPods.

Readers described their design – which hasn't changed much from the ubiquitous EarPods, apart from the omission of the wires – as lazy and impractical.

"I really want expensive headphones that fall out of my ear every two seconds," said Sarah Thomas sarcastically. "The least they could do is utilise some form of silicone or memory foam ear tips," agreed Errik Wong.

As for the phone itself, readers felt uninspired by the latest update. "Apple has run out of innovation," wrote regular commenter Archi-Nerd. "Now for something completely the same!" said Bobby D, although Joel K stepped in to defend the removal of the headphone jack as "innovation at its finest".

Read more about the iPhone 7 and AirPods, and leave a comment ›

"This is in fact a four-year-old design"

After releasing its largest models to date – the iPhone 6 and 6 Plus – Apple decided to go back to its roots in March 2016 with the scaled-down iPhone SE, for those ill at ease with phone-tablet hybrids.

Fans of older Apple products cheered. "Like Volkswagen with its Beetle, the iPhone SE is a flawless design technologically updated to still be pertinent," said Manuel Leveille – before adding that the iPhone 6 is a design failure in contrast.

"The form of the iPhone 4/5 is where Apple created a design classic," said Tom.

But some readers felt the SE was an attempt by Apple to backtrack on unpopular releases.

"Really? Surely this is just Apple admitting that they missed an opportunity with the iPhone 6," wrote Hugh. "They should have offered a phone of comparable size to its predecessor, while offering a larger model for those who actually wanted it. This is in fact a four-year-old design."

Read more about the iPhone SE and leave a comment ›

When the company's then senior vice-president of design, now design chief, Jonathan (Jony) Ive, officially brought his friend and collaborator Marc Newson into the Apple fold in September 2014, reactions were mixed.

"Hiring anyone connected to Gangstar Raw jeans is a sure sign of Alzheimer's," wrote num. "With hope he should only be allowed to design the screws and fasteners for Apple store construction."

"In light of the iPhone 6 bending debacle, this news seems more and more like Apple has jumped the shark," added TFO.

Other commenters welcomed the move. "He is the kind of designer we need to see over here! See you guys down at Whole Foods!" wrote Bric.

"Perfect fit for Apple to keep their momentum," added Mirqus. "Newson has the same futuristic and spacey flavour as Ive's team. And if Apple wants to keep branching into new markets (wearable, home etc), Newson is a great addition."

"I don't know how this escaped their testing"

The widespread unpopularity of the iPhone 6 Plus was largely down to #bendgate – a social media storm that started in September 2014 with Twitter users claiming their new devices were bending under minimum pressure.

The flaw was attributed to the phone's skinny design, as Apple opted for a larger screen and shaved millimetres off the thickness of previous models.

"As much as I like the design of the new iPhones, I don't understand the constant obsession with thinner and thinner devices," said Bart. "They become unusable."

"Apple is above surface aesthetics. They've been producing engineering marvels for years," said regular commenter The Liberty Disciple. "I don't know how this escaped their testing."

The controversy also brought out a lot of humour in readers, who particularly enjoyed rumours that the phone was bending in trouser pockets. "Tight skinny jeans or the iPhone 6? Decisions decisions," wrote Hugo.

Some readers predicted Apple would capitalise on the bad publicity in the future. "It's only a matter of time before they patent it and release it as the iBend," wrote Chris.

"Apple is improving but is it the leader in the interface of the category it invented?"

Apple's iOS 7, released in June 2013, was the highly anticipated first major user interface redesign since Jony Ive was put in charge of both hardware and software design across the company.

The launch signalled Apple's shift away from skeuomorphism, but at the time, some readers were clinging to their drop shadows and real-world visual references for dear life.

"I will miss the warm leatherette, literal interpretations of the old world," wrote Bob. "Luxurious textures get me any day over a boring overuse of fine weight fonts," insisted Chris. "How do we tell apart the icons now?"

Other readers welcomed the "fresh" iOS but thought it showed that Apple was taking its cues from Google and Microsoft. "Apple is improving but is it the leader in the interface of the category it invented?" asked Tim. "Android still is lame but honestly MS8 is the most fresh and user-friendly interface now."

Naishh uttered a phrase that's been oft-repeated since: "Once a leader, Apple's turning out to be a follower." 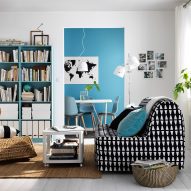