San Francisco firm Schwartz and Architecture has overhauled a single-family home on a steep and narrow site, lifting the existing building to add a storey beneath it, and creating an extension at the back over three levels.

The lots that form the Californian city's urban fabric are defined by a 25-foot (7.6-metre) grid that is "conducive to the small defined rooms of a traditional Victorian, but challenging for modern California living", said Schwartz and Architecture.

To create more open-plan spaces and improve access to natural light for the 29th Street Residence, the architects chose to build upwards and maintain a compact footprint.

"With the width of the lots reduced by required neighbour setbacks on either side, we understand the imperative to go vertical," they said.

The architects raised the front portion of the home and inserted an additional level underneath it. This allowed the family's social spaces to expand into areas that were previously occupied by the garage.

Areas on the lowest storey include two parking spaces and an entertainment room with large pivoting doors that open out to the garden.

Visitors access the home from street level, where the architects laid out a guest bedroom at the front, and kitchen, dining and living areas at the back. Here, a series of large steps face the rear deck and yard beyond.

"The hugely over-scaled stadium staircase in the living room hides the parking ramp below, creating additional social space for the long and narrow public space," the architects said.

The staircases occupy different areas of the floor plan at each level, depending on the specific requirements of each storey.

White oak was used for them all as a unifying material marks the vertical circulation from the basement level to the rooftop.

"By allowing the staircases of the three-storey structure the freedom to shift location on each level [...] we elevate the prosaic stairwell into the key architectural and unifying feature of the home," said Schwartz and Architecture.

The first storey has three bedrooms. The two smaller rooms face the street, and share a bathroom off the landing.

The master suite, which faces the yard, is illuminated by a floor-to-ceiling glass wall that gives out onto an outdoor staircase to the roof.

At the rooftop, residents can use an outdoor dining table or sit in a more casual lounging area while taking in views of the city.

The front of the home was finished in a simple grey cladding reminiscent of the original property. The back, however, features large glazed surfaces, and an exposed steel structure.

Schwartz and Architecture have also recently completed a minimalist, angular home overlooking the Sonoma Valley and a retirement home with a large circular skylight in Silicon Valley. 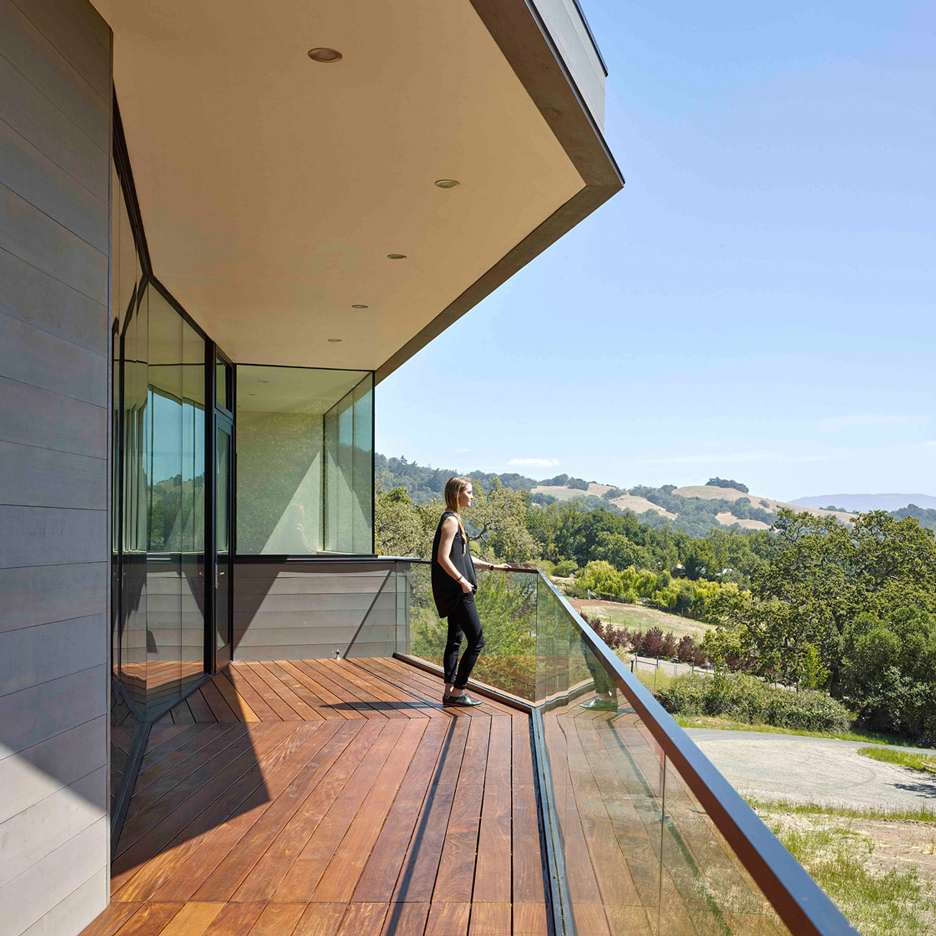