Paredes Pedrosa Arquitectos has converted three houses within the walls of a 15th-century castle in the foothills of Spain's Sierra de Gredos into a pair of brightly lit homes for a brother and sister.

The houses sit within an arcade built by a former resident to link Toledo's Oropesa castle with the neighbouring Nuestra Señora de la Asunción church.

Lacking sufficient windows to provide natural lighting and ventilation, these three houses had since become dilapidated – calling for the Madrid-based architect's intervention.

"The project transforms the interior spaces into two houses, for brother and sister that share one single long patio, open in one side to the vision of the 16th-century church tower as a backdrop."

Due to heritage protection, the facade could not be modified and the renovation therefore centres around opening out the existing shared courtyard to maximise natural light.

This called for the three houses to be divided – meaning that the overall floor area was reduced by 52 square metres. However to create two houses of equal size, one was then extended.

The architects also removed an existing wall within the central courtyard to create a visual connection between the patio area and the church.

Alongside these alterations, many of the existing walls that form a large part of the town's historical heritage had fallen into disrepair and needed to be rebuilt.

When infilling gaps in the structure, the architects wanted to ensure new materials were sympathetic to the original surfaces of the house.

Both the paving and the lower part of the damaged ancient walls are covered in a light ceramic brick, which complement the various original textures, while helping to reflect light.

Similarly, inside the ancient brick and original stonewalls were also retained, but painted white for a contemporary finish.

The architects also created a new space under the roof, by fully disassembling the structure and re-building it one metre higher with the original wooden structure.

Other architects who have transformed ruined buildings include Haworth Tompkins, who inserted a striking Corten steel studio into a ruined Victorian dovecote in Suffolk, and Witherford Watson Mann, who added a contemporary house behind the crumbling walls of a twelfth-century castle in Warwickshire. 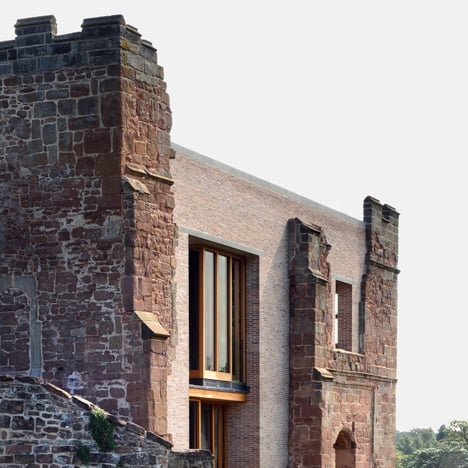 Photography is by Luis Asín and Paredes Pedrosa.