Japanese architect Tadao Ando has revealed his plans to convert Paris' Bourse de Commerce building into a museum that will host one of the world's largest contemporary art collections.

Ando was commissioned to create the gallery within the heritage-listed building by French businessman François Pinault, who will use the space to host his collection of contemporary artworks known as the Pinault Collection.

A cylindrical gallery will form the main exhibition space, and will be set into the centre of the plan below the building's domed ceiling.

A new 300-seat auditorium and foyer will be set beneath the main gallery. The entire cylinder will be encased by nine-metre-tall concrete walls and will span 30 metres in diameter.

"Charged with the task of giving the historic customs house a new life as an art museum, I proposed to introduce architectural elements as devices for inducing dialogue between the old and new," said Ando. "This concept is epitomised by the central court, the main gallery space with a square plan, which I embedded at the heart of the building."

"The Bourse de Commerce is also an exquisite historic building. By nesting new spaces within it, while respecting the memories of the city engraved in its walls, I will transform the building's entire interior into a space for contemporary art."

The Pritzker Prize laureate will arrange the 3,000 square metres of gallery space over three floors, with curving walkways skirting the edge of the central exhibition hall.

French architect Pierre-Antoine Gatier is overseeing conservation works on the building, while Nem Architectes are collaborating with Ando on the design and build.

"Tadao Ando devised a pioneering design that carefully considers the architectural and historic characteristics of the building, respecting its past while accommodating the needs of today," said Pinault.

"The building's exterior and its landmarked elements  – the internal facade, skylights, and frescoes – will be returned to their original condition."

Ando has previously converted two buildings in Venice to host parts of the collection – the Punta della Dogana and the Palazzo Grassi.

In light of the current political unrest across Europe, he sees the third building for the collection in Paris a symbol of hope for culture in the city.

"These are tumultuous times in Europe. The recurring terrorist incidents and the UK's withdrawal from the EU have fueled anxiety over what the future holds, and countries and people alike seem unsure of their own identities," said Ando.

"Such are the circumstances among which François Pinault has launched a new enterprise here in Paris: the Bourse de Commerce. This is a project that calls on the people to recall France's proud identity as a country of culture and art and to renew their hopes for the future." 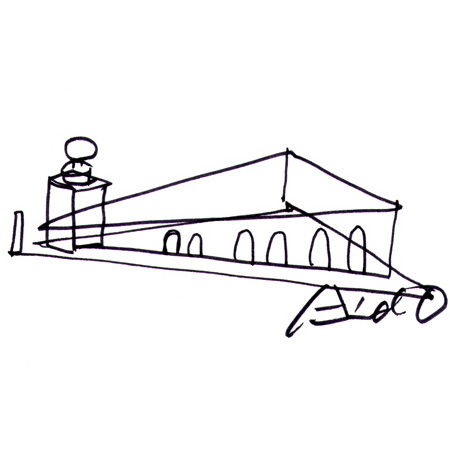