A shade of teal inspired by the landscape surrounding Scotland has been named the World's Favourite Colour, following an international survey carried out by paper company GF Smith.

The colour, named Marrs Green, was found to be the most popular shade worldwide based on thousands of responses GF Smith gathered through an online survey. People taking part were asked to choose their favourite hue from a range of public suggestions.

Marrs Green is named after Annie Marrs, who picked the colour originally. GF Smith has now temporarily added the colour to its Colorplan paper range.

"The colour was inspired by the landscape that surrounds me at home in Scotland and that deep green hue with a tinge of blue has always been a favourite of mine," said Marrs, who is based in Dundee.

The news was announced in Hull, this year's UK City of Culture, via an explosion of paper helicopters over the city's Humber Street.

A pop-up shop is also selling a range of products from brands including Tokyo Bike and Anglepoise, all customised in the Marrs Green shade.

Caroline Till, the editor of Viewpoint Colour Magazine, suggested the shade's success was down to people wanting to reconnect with the natural world.

"As the contemporary condition of 'nature deficit' rises in the context of increasingly urban and digital lifestyles, we seek to reconnect with the natural world, hence the current global popularity of the colour green," said Till.

"In these uncertain times, where political and social upheaval has become the norm, we crave the calming tranquility of green and its association with the reassuring certainty of nature's cycles."

The World's Favourite Colour is one of a number of activities GF Smith – founded in the northern city in 1885 – is taking part in as part of Hull City of Culture.

A series of installations named Paper City has seen designers including Max Lamb and Bethan Laura Wood create structures from paper, and will be on show until 9 July.

For his installation, Lamb looked to the size and weight of papers created by GF Smith, and made a series of large objects that he named Colorplan Furniture.

Wood's offering is located in an old smoke house and is made of strands of paper seaweed, while Adam Holloway Architects' Apeiron Flow gets its fluid shape from an algorithm.

Artist Joanna Sands' installation is made up of a group of curving stacks of paper scattered across a gallery floor, while Richard Woods used Colorplan paper to create a graphic brickwork across disused buildings on Humber Street.

For her Island Life piece, artist Jacqueline Poncelet cut and folded the full range of Colorplan paper shades to create an optical-illusion-style installation that appears to change colour as viewers move around it.

Made Thought, the studio that created an installation for GF Smith's first showroom, based its Fabric of Hull piece on the relationship that the company has with Hull. This manifests in the form of a nine-metre-long tapestry made from woven paper strips.

Lazarian, a Manchester-based creative studio, looked to Hull's relationship with cod fishing and created a four-metre anatomical paper model of a fish.

Since its founding by George Frederick Smith in the 19th century, GF Smith has become a favourite among graphic designers, architects and artists. 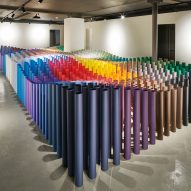