From 2019, all new Volvo cars will have electric or hybrid engines, the Swedish auto manufacturer announced today.

The move makes Volvo the first of the major car companies to commit to phasing out the internal combustion engine and going all-electric.

Håkan Samuelsson, Volvo Cars president and chief executive, said the decision to focus on electrification was taken mostly in response to consumer demand.

"This is about the customer," said Samuelsson. "People increasingly demand electrified cars, and we want to respond to our customers' current and future needs."

"This announcement marks the end of the solely combustion engine-powered car."

Volvo's decision comes after German legislative bodies moved to ban petrol-powered cars from sale by 2030, providing a window into potential future regulations across the European Union.

This would effectively phase out vehicles with internal combustion engines – which generate power through the hot gases produced by the burning of fossil fuels – from sale in 13 years' time.

"We will meet the requirements in the EU until 2020 with the products we have now," he said. "But we believe the [future] targets will not be possible to meet with only internal combustion engines."

Volvo's plans will see the company launch five new fully electric cars between 2019 and 2021 – two of these from Polestar, Volvo's performance car arm.

These models will also come in hybrid variants, ranging from plug-in hybrids to mild hybrids. The latter are close to conventional combustion engines, only using the electric motor to override during braking, cruising and restarting.

Both petrol and diesel hybrids will be available. Volvo says this represents "one of the broadest electrified car offerings of any car maker".

Tesla is the only car manufacturer that is currently all-electric. The Elon Musk-headed company, which unveiled its first car in 2008, has only ever made vehicles that are electric.

Volvo Cars, which been owned by Chinese auto manufacturers Geely since 2010, currently sells some plug-in hybrid models but not a fully electric vehicle.

Jaguar, Volkswagen, BMW and Nissan are among the companies to have already released 100 per cent electric models, putting Volvo seemingly a step behind.

The manufacturer has also recently been exploring self-driving technology, both independently and through a partnership with Uber.

It plans to have driverless vehicles ready by 2020. Although the managing director of Volvo Australia, Kevin McCann, recently told ABC, that getting the system to recognise kangaroos was proving to be a challenge. 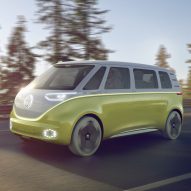