Japanese architecture studio Chop + Archi has used a trio of courtyards to make the most of the sharp "dead space" corners of this house, located on an almost triangular plot in Tokyo.

Situated on a south-eastern corner plot in a dense residential area in Tokyo's Setagaya ward, Kamiuma House provides the home for a couple and their daughter.

The family asked Tokyo-based Chop + Archi to completely fill the unusually shaped site, while also offering them plenty of privacy from their close neighbours and control of the levels of strong sunlight.

This prompted the architects to build the house with few openings on the exterior. Daylight is instead brought in through three voids carved into the corners of the house, which form outdoor space with windows to the interiors.

"Because buildings on triangular lots tend to include dead space in the acutely angled corners, the three corners in this house are used as exterior voids," said the architects.

"While the location is open, many surrounding residences face towards it, which inevitably creates a feeling of visual pressure," they continued.

"To deal with this, the design includes three voids that serve as intermediary spaces between inside and outside, gently connecting the house to the surrounding neighbourhood, while still ensuring privacy."

As well as making the most of the corner spaces, the voids result in new walls built within the angular outline work to soften the shape of the interiors.

One of the openings slices through the south-east facing corner to create the entrance, which is punctured on the exterior by an irregular triangle.

This leads into the ground floor where the open-plan living, kitchen and dining room has large glazed sliding doors that face an internal courtyard – the second of the corner voids.

The third opening is located on the north-facing side, providing a small terrace accessed from the street with a window into the main living area.

Angular shapes are continued inside the residence as the first floor pulls away from one of the walls to create a void above the lounge.

Occupied by a bedroom with a window to the space below, the white upper volume features exposed wooden beams on its underside.

This palette is continued across the house in the form of wooden flooring and white walls, as well as the simple kitchen counter that extends to form a dining table.

The bathroom at the rear of the ground floor is completely white-washed.

The lower part of the staircase is also made of wood. It is raised above the ground to form the first six steps, before the staircase doglegs and changes into a dark metal.

Setagaya is one of the 23 wards that make up the most densely populated part of Tokyo. Other residences in the neighbourhood include a house formed from repeated hexagons for a car dealer and a home with a curved wall that allow pedestrians to cut the corner. 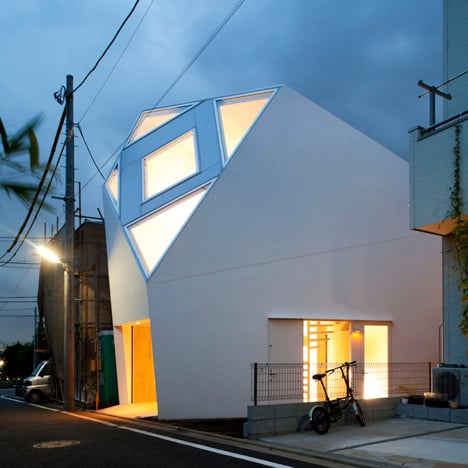