Design studio Atelier NL is calling on people to send them sand from around the world for a project they will present as ambassadors at this year's Dutch Design Week.

To See a World in a Grain of Sand is the latest work from the studio to explore local variations in sand composition, following its ZandGlas glassware line specific to regions of the Netherlands and ZandBank study of 80 sands from across Europe.

As in those projects, To See a World in a Grain of Sand will involve Atelier NL melting each site's "wild" sand sample into glass, with location-specific variations encouraged.

However, the studio will cast its net wider than before by asking for sand contributions from people across the world. Interested parties can send in 330-millilitre bottles of sand from their own local environments using a special website Atelier NL will launch in August.

When fired at high temperatures, these samples are expected to produce glass with colours and textures unique to their specific areas.

Atelier NL co-founders Nadine Sterk and Lonny van Ryswyck, who are among this year's ambassadors for Dutch Design Week (DDW), said that they saw the project as a way to engage audiences with both design and the environment.

"From students and scientists to neighbours, children and artists, we bring people into our process," they said. "By becoming part of our work, they begin to appreciate the wealth of local areas in new ways and thus identify more deeply with their surroundings."

"As DDW ambassadors we would like to engage people both with our work and the future possibilities of design via sand as a versatile and diverse medium. Each grain of sand tells a story of connection between local materials and humankind over time."

In addition to the sand sample, Atelier NL asks that participants in To See a World in a Grain of Sand take a photo that "best describes the area" and note down the precise address or GPS coordinates. Some early contributions are already documented on the studio's website.

The studio hopes that the project also alerts the industry to the potential application of sand in its wild forms, noting that current glass manufacturing uses exclusively pure white sands from a few quarries.

"As an expression of the human desire for speed, control, and predictability, the conversion of white sands into glass has become highly standardised," they said. "Somehow, along the way, sands have lost their stories along with their natural colours and personalities."

Atelier NL first started its experiments with sand in 2009, when it produced Drawn from Clay, a collection of ceramics made of soil collected from different farms.

This evolved into ZandBank, which saw the studio build a library of 80 different natural sand samples from western Europe, following a glass-trading route used by the ancient Romans.

The designers fired the sands in small porcelain pots, describing the experiment as yielding "a stunning array of unique colours, opacities and fractal patterns".

For the most recent incarnation of the project, ZandGlas, they turned sand collected from distinct regions of the Netherlands into glassware sets made up of a carafe and three glasses.

Atelier NL will present To See a World in a Grain of Sand at the 16th edition of Dutch Design Week, which takes place in Eindhoven from Saturday 21 October to Sunday 29 October.

In addition to Atelier NL, the ambassadors for this year's event are Winy Maas of architecture firm MVRDV and Dezeen's own founder and editor-in-chief Marcus Fairs. 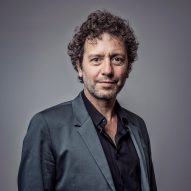