Poundland had earlier announced that it would be releasing its Twin Peaks bar in the first week of July. But the product is yet to hit shelves, and the Guardian claims this is due to a legal dispute with Mondelez International, Toblerone's manufacturers.

Unlike Toblerone, whose distinctive pyramidal shape is said to be inspired by the Alps' iconic Matterhorn, Poundland's chocolate bar has a double peak that the company claims is borrowed from Wrekin Hill in Shropshire, a county in England's West Midlands.

According to the Guardian, Twin Peaks' launch was delayed after Poundland received a legal letter from Mondelez, and the companies subsequently held talks. A spokesperson for Poundland yesterday would only say the product "is still in development".

The retail chain has never denied the direct inspiration of Toblerone on its product, positioning it as a direct response to the recent redesign of Toblerone for the UK market, which altered the bar's signature shape.

The redesign was poorly received, with consumers dubbing it "wrong" and "austerity Toblerone". Poundland began developing Twin Peaks in response to the customer backlash against Toblerone, which the chain said was its top-selling item.

"That's why we've created a new £1 alternative for them – the size they wanted, with a British taste, and with all the spaces in the right places."

The redesign was poorly received, and prompted Poundland to launch Twin Peaks

Poundland, which partnered with Walkers Chocolates to produce Twin Peaks, describes the bar as having a "distinctive British flavour" compared to its competitor. It is also 20 per cent heavier at 180 grams for the same price of £1.

Both parties have refused to comment on the dispute, so the details of Mondelez' complaint against Poundland are unknown. The international confectionary manufacturer has a registered UK 3D trade mark on the shape of the Toblerone, although legal experts have suggested the recent redesign might weaken that protection.

Trade mark protection is famously hard to secure for the shape of designs, with Mondelez rival Nestlé recently failing to clinch it for the KitKat bar. 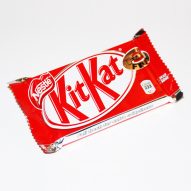