A library of parts could be used to create personalised self-build apartments, with this construction system designed by Bartlett graduate Julia Baltsavia as a solution to London's housing crisis.

The I-Architecture project, completed by Baltsavia as part of her studies on the Bartlett's MA Architecture programme, offers an alternative to conventional house building, which she claims is failing to provide sufficient accommodation in many major cities.

"Contemporary modes of production are no longer rational," claimed Baltsavia. "As a reaction to this, a very different kind of housing industry has emerged – an open-source paradigm, which is focused on growing the housing supply for the 'long tail' of individuals seeking to self-build their own housing."

The proposal aims to facilitate the rapid building of mass housing through the use of fully automated digital-fabrication technologies to produce pre-fabricated modular components.

An online open-source library of modules that could be combined in various ways to create different apartment typologies would offer the occupant more involvement in the design of their house.

The modules are based on the characteristics of the I-beams used in traditional construction. The extruded form of these structural components is reinterpreted in a variety of sectional units that are large enough to accommodate living spaces.

Once the desired modules are selected, they could be carved from foam blocks by a robotic cutting machine. Aluminium end caps added to each section would facilitate their connection and protect them from water damage.

The modules would be sprayed with fibre-reinforced concrete to provide structural rigidity, before being transported to the site, connected and lined with either CNC-milled wood or 3D-printed plastic surfaces.

Baltsavia sees her project as a response to the growth of open-source frameworks, which enable consumers to participate in the design of objects by adapting standardised templates. She believes it is time for architecture to adopt similar practices, to offer more democratic, decentralised solutions.

"In an open source paradigm in architecture, the role of the architect shifts from that of a designer of a predefined product to that of a framework, within which users can directly intervene and customise it according to their personal needs," she suggested.

The open-source system would allow low-rise buildings of up to three storeys to be designed and constructed with limited professional assistance.

Anything taller would require an architect to be involved in the process, offering a choice of pre-determined apartment typologies that could be combined to create a high-rise structure adapted to meet the specific needs of its occupants.

Baltsavia developed I-Architecture as part of Unit 19 at the Bartlett School of Architecture, called Architecture Made of Parts. Tutors Mollie Claypool, Manuel Jiménez García and Gilles Retsin asked students to look at how digital production can become a tool for social change. 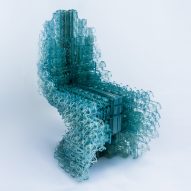