Loughborough University graduate Benjamin Cullis Watson has designed a smell-free rubbish bin that can quickly compost waste from the kitchen.

The Taihi bin converts food waste into compost for the garden, as well as liquid fertiliser for household plants.

It relies on bokashi – a Japanese method that uses fermentation to decompose rubbish, leaving no mess or smell behind. Taihi automatically sprays an accelerator mixture  onto the waste to start the process, which takes around two weeks.

The method produces both liquid, which is stored in a sealed watering can that can be removed to instantly feed plants, and compost that's driven into a separate container.

A double-lid system and set of rubber seals prevents smell, and the bin is covered in a non-stick coating to aid emptying and cleaning. Unlike many composting systems, the waste doesn't need to be turned and doesn't rely on specific conditions or combinations of waste.

Cullis Watson – who created Taihi while studying Product Design and Technology at Loughborough – became determined to tackle the UK's waste problem after a childhood spent in Ethiopia, where he says very little was thrown in landfill.

"Trying to change people's perceptions of waste and make it as 'sexy' as possible is part of the challenge, and something I relish as a designer," he told Dezeen.

"Products already on the market use things like worms and turning mechanisms, but I wanted to find something that was different," he continued. "I stumbled on bokashi in an online journal and thought its simplicity was perfect."

The designer created a purposefully "clear and minimal" appearance for the bin, to emphasise the method's cleanliness and simplicity, and visually link it to modern Japanese design.

Cullis Watson is currently investigating options for Taihi – which was awarded the 2017 New Designers Joseph Joseph Brilliantly Useful award – and completing a second version of the design.

Dutch design duo Makkink & Bey have also created a unique method of waste reuse, designing a toilet that collects poo and wee and transforms it into compost. 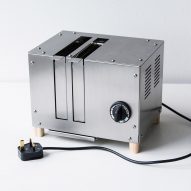