Aiming to change our attitudes towards our own excrement, Dutch design duo Makkink & Bey have created a toilet that collects poo and wee before turning it into compost.

The studio of Rianne Makkink and Juergen Bey created the Compost Kliko Toilet having used a similar method to dispose of waste on their farm for a number of years.

The duo came up with an idea for a toilet that would make use of the properties of excrement, instead of just flushing it away.

"We are raised with the idea that our own excrements are disgusting and unhygienic, but it is not that bad," said Makkink. "Our urine is actually very clean, it creates phosphates that we will need desperately in the near future. Phosphates will become valuable, like water."

Inspired by so-called Nonolets – toilets that don't require a water flush – the duo created the Compost Kliko Toilet from a white wheelie bin, similar to those seen outside houses in Amsterdam. A box on top of the bin provides privacy, while a cover allows users a comfortable seat.

After users visit the toilet, they throw ashes on top that get rid of the odour while also enriching the human manure. Urine is drained and collected at the bottom, where it can then be removed and used for producing electricity.

"We've used our own Nonolet at the farm for over ten years now," they said. "It is an ordinary toilet, but the faeces are being caught in a plastic bag and separated from the urine."

By separating the waste products, the ammonia found in urine doesn't contaminate the faeces, which can therefore be used as a fertiliser for soil.

"The combination of faeces and urine produces ammonia, and this also goes for animal manure," said the designers. "This is where we are making a big mistake in our waste system."

"We have been working with a biological farmer to separate the two, so we can reuse the waste. Of course, human fertiliser needs to be manipulated before you can use it, just like the fertiliser of animals."

In the future, the designers hope to work alongside the Dutch government to bring these toilets to normal households; however, they know that people's mentality towards their toilet habits will have to change first.

The Compost Kliko Toilet is currently on show at the CubeMuseum in Holland at an exhibition titled Everything You Always Wanted to Know About Toilets, But Were Afraid to Ask. 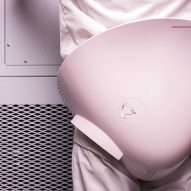 It is displayed alongside designs that showcase the history of the toilet, as well as others that explore hygienic and environmental issues, and the potential uses of what is usually flushed away.

The potential of waste has been explored by a number of designers. Eindhoven designer Jalila Essaïdi turned manure into haute couture with her poo-based fabric, while a group of Geneva students managed to generate electricity from dog poo.