The Olson Cabin is located on a forested site in Longbranch, a village situated on a peninsula in the Puget Sound. The site has been in the Olson family since the early 1900s.

The project has involved numerous expansions over the decades to a 200-square-foot (19-square-metre) bunkhouse built in 1959. The tiny cabin, which sits atop stilts, was designed by Olson when he was a teenager.

"When he was 18 years old and a first-year architecture student, his dad gave him $500 and said, 'Go build a bunkhouse'," said the team at Olson Kundig, founded by Olson in 1966 and later joined by Tom Kundig.

The cabin was first expanded in 1981, which resulted in three small pavilions linked by wooden platforms. Olson undertook more additions in 1997, 2003 and 2014, including the creation of several bedrooms, a living room with a large glass wall and a unifying roof. The dwelling now totals 2,400 square feet (223 square metres).

With each modification, the architect has worked to preserve older elements. "Each successive expansion and remodel has reused and integrated the previous structure rather than erasing it, revealing the history of the architecture and the process of its evolution," the studio said.

The architect has used simple and readily available materials at all stages of the cabin's evolution. Columns and beams are made of wood and steel. Walls are covered in plywood and recycled boards, with large expanses of glass offering views of the scenic terrain.

"The cabin is intentionally subdued in colour and texture, allowing it to recede into the woods and defer to the beauty of the landscape," the studio said. "Materials enhance this natural connection, reflecting the silvery hues of the overcast Northwest sky and tying the building to the forest floor."

The cabin's function has changed over the decades. Initially a bunkhouse for friends, it later became a retreat for a young family. It now serves as "a quiet place for contemplation and creative work, and a comfortable place for visiting grandchildren, extended family and friends".

"The cabin has been a work in progress since it began, with each transformation acknowledging the changing priorities of its designer," the studio said. "What has remained unchanged is Olson's deep reverence for nature and his admiration of the site's beauty."

Olson Kundig has completed a variety of residential projects across Washington state, include a concrete house embedded in a rocky outcrop and a "virtually indestructible" steel cabin that is raised on stilts. 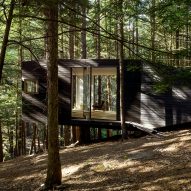