Dezeen promotion: ahead of the launch of the V&A's new design museum in Dundee next year, the organisation has created an online platform to showcase the work of emerging Scottish designers.

Dezeen is media partner for Design Champions, an initiative that is already underway and will run until the V&A Museum of Design Dundee opens in 2018.

Each week, the museum profiles a designer based in Scotland whose work exhibits high quality, demonstrates social awareness and could help to improve people's lives. Profiles will be published on the museum's website, as well as on its social media channels.

Textile and jewellery designer Kirsty Stevens was the first to be selected back in April for her Making MS Visible project. Diagnosed with multiple sclerosis in 2007, Stevens referenced her own brain scans to create surface patterns that feature on laser-cut acrylic necklaces, cushions, and silk scarves.

"Using my own MRI scans that were taken in the lead up to my diagnosis, I use the shapes created by harmful lesions as the source material, creating beautiful patterns and designs that turn this negative into an unrecognisable positive," she said.

Other featured designers include Malath Abbas and Tom deMajo, who developed a video game that explores drone warfare through the eyes of a child, and furniture designer Scott Jarvie, who first unveiled his Clutch chair made from drinking straws during Milan in 2008.

Selected designers may feature in a series of galleries dedicated to the last 300 years of Scottish design, when the museum opens next year. The museum will also become the only UK location outside of London to host international touring exhibitions from the V&A.

V&A Dundee is Japanese architect Kengo Kuma's first building in the UK. He conceived the museum as a "living room for the city" that will bring visitors to the historic River Tay waterfront. 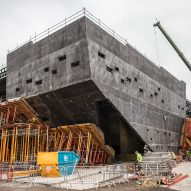 Find out more about Design Champions on the V&A Dundee website.