The 2011 earthquake and tsunami in Japan was the first in a series of grave events that prompted Fukushima-based architect Cohta Asano to develop the complex design for his new home.

Made of up nine overlapping cuboids, of all different sizes and proportions, the house has little in common with the other residential properties in Fukushima, many of which had to be completely rebuilt in the aftermath of the earthquake and the subsequent nuclear power station disaster.

This particular site had belonged to Asano's family for some time, but the house that previously stood on it was destroyed in a fire six months after the disaster – so it was necessary for the architect to design a new one.

He came up with his design in response to this series of misfortunes, as well as events that followed.

"After the earthquake I suffered a downturn in my life," he explained.

"The damage due to the earthquake in Fukushima and the resulting nuclear pollution caused by it was devastating. In addition, my grandmother's death affected my personal life," he said. "In the midst of that situation, I envisioned a more open architecture."

The house is three storeys high, but has no obvious front or back. Instead, it comprises a cluster of rectilinear blocks, some that meet the ground and others that are raised up into the air.

Doorways are slotted into the gaps between blocks, and rooms dividers are created at the points where the blocks overlap.

Inside, this creates a highly irregular layout, with split levels, double- and triple-height spaces, and plenty of nooks and crannies. In total, the house contains 70 square metres of floor space.

Asano believes this arrangement will be easily adaptable and extendable, as his family grows and circumstances change. He describes it as having the "space and atmosphere of a folk dwelling".

"The nine cubes, which are split by angles, create harmony and various spaces, by length or size and so on," he said.

"It was my goal to 'live within the frameworks'. This is similar to the way of living in an old folk home," he continued. "It adapts to social background and family structure."

The building has a wooden structure that is completely exposed inside, creating a three-dimensional grid that can function as shelving. Wooden boards clad the building's exterior, and also extend into some spaces inside the house.

Asano's aim was to satisfy fire-safety regulations and no more. Other details follow this minimal approach, from the basic light fittings to the steel-framed staircases and unfinished floors.

The architect currently lives in the house with his mother, who also uses the building to host music classes. Knowing that the house would often have children coming in and out, Asano positioned the bathroom close to one of the entrances.

This space is lined entirely with small white mosaic tiles, offering a contrast to the rest of the interior.

"My wish is that the site creates happiness and joy," added Asano. " I hope the view of kids becomes part of the house. Then, I can show the open environment to the neighbourhood."

Asano is one of the two founders of local studio BHIS Architects, along with colleague Kazuhito Sato. Other projects by the architect include a hair salon framed by diamond-shaped partitions, located in nearby Iwaki. 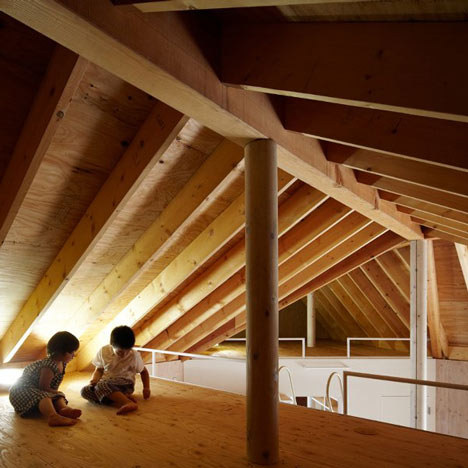