Brunel University graduate Emilios Farrington-Arnas has designed a collection of wearable devices that vibrate to guide visually impaired wearers to a destination.

Farrington-Arnas wanted to offer partially sighted people greater independence, by giving them a safer way to navigate from place to place.

"Being told that you have a lifelong, incurable eyesight problem is a terrifying prospect, one that is very difficult to come to terms with," explained the designer, who studied on Brunel University's industrial design BA programme.

"For the visually impaired, retaining independence in day-to-day life is important, however, navigation can be a long-winded, potentially unsafe process, especially in new environments or at night," he said.

"Simple tasks like travelling to work can become arduous and time consuming and more often than not, need planning beforehand."

Called Maptic, the set comprises a visual sensor that can be worn like a necklace, and a series of feedback units that can be clipped onto clothing, or worn around the wrist.

The sensor connects to a voice-controlled iPhone app, so it can use GPS to direct the wearer. It does this through a series of vibrations to the left or right side of the body.

Based on his research, Farrington-Arnas believes this is the most natural and reliable form of tactile instruction, as people are accustomed to their phones vibrating in this way.

"How the user interprets the objects in front of them into touch was the most important part of the project," he told Dezeen. "There was a lot of research and prototyping involved to design intuitive vibrations."

"I ended up testing many different sorts of components, vibrations and intensities until the most intuitive choice of hard, ticking vibrations was chosen – a function that is reminiscent of sonar."

Unlike other aids, Maptic can track and respond to obstacles at chest level and higher.

It doesn't require the user to have headphones in to listen to directions – like other systems, such as the Microsoft and Future Cities Catapult headset – so users aren't distracted from surrounding environmental noise.

Farrington-Arnas's family has a history of poor eyesight, which is one of the reasons he embarked on this project. His experience taught him that one of the most important things to combat in a project like this is the stigma that surrounds the use of assistive devices.

As a result, each Maptic device can be worn unobtrusively, and can also be personalised.

"Having a wearable system rather than a singular product allows for the user to select and tailor the devices to their daily needs," said the designer.

Farrington-Arnas has created a film to explain his concept

"A major issue that visually impaired people raised is that assistive products tend to look overly medical, or just plain ugly," he added. "I tried to solve this with a form that could be mistaken as a fitness tracker or similar, and allows user personalisation of the colours and finishes."

The designer is currently experimenting with ways of extending the system for use by able sighted people – who have also shown interest in its turn-by-turn navigation. 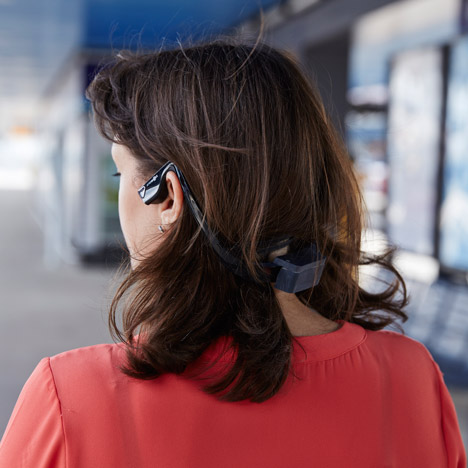