Museum director Martin Roth has passed away at the age of 62, prompting tributes from his former colleagues at the V&A.

Roth left the London institution last year after spending five years as its director. His departure coincided with his vocal criticism of the UK's Brexit decision, which he described as a personal defeat.

He passed away on 6 August, following a cancer diagnosis that came shortly after his departure.

Nicholas Coleridge, chair of the V&A, described Roth as "a man of prodigious energy" in a statement, while others at the museum shared their memories of him in a blog post.

"We will greatly miss Martin, and are profoundly grateful for his considerable contribution to the V&A," said Coleridge. "Martin will be remembered as a man of prodigious energy; a director with a global reputation both within the museum world and beyond; a committed Europhile and cultural ambassador with a philosophical turn of mind, as well as a devoted husband and father."

"As director of the V&A for just over five years, Martin made it his mission to raise the international profile of the museum, and under his leadership, the V&A was named 2016 Art Fund Museum of the Year."

"Martin was the impetus behind initiatives such as the V&A's presence at the Venice Biennale," Coleridge continued. "He was instrumental in the founding of the V&A Research Institute, and was closely involved in the expansion of the museum's footprint to Dundee and Shekou, as well as recent openings of the European Galleries 1600-1815 and the V&A Exhibition Road Quarter."

We are deeply saddened to hear that Dr. Martin Roth, V&A Director from 2011-2016, has died. Our statement: https://t.co/Hlw3will55 pic.twitter.com/w3VOy0DsXE

Born in Stuttgart, Germany, in 16 January 1955, Roth completed his PhD at the University of Tübingen. He spent time in academia and as a curator before becoming director general of the Dresden State Art Collections, a grouping of 12 museums and galleries, in 2001.

Roth left that post to join the V&A in 2011, where he stayed until 2016. Notable exhibitions opened during his tenure include David Bowie Is, Alexander McQueen: Savage Beauty, Disobedient Objects and Engineering the World: Ove Arup.

While Roth attributed his departure from the V&A to wanting to spend more time working with international cultural consultancies, and with his wife and children, his move was rumoured to have been fuelled by the Brexit referendum result, of which he was fiercely critical.

"Until now, we had assumed we were all working together towards a common platform," he told German broadcaster DW in September 2016. "Now that platform has been smashed."

He was succeeded in his position by Tristram Hunt, a former British Labour politician.

On the V&A blog, the museum's deputy director and CEO Tim Reeve shared some more personal recollections of his former colleague, who he said was a "great person" and a "big thinker".

"And he was all of those things, incredibly charismatic, always comfortable being photographed and microphone in hand on a discussion panel in some far flung and exotic location."

"I was lucky to see the more private side of this force of nature," he continued. "More at ease in smaller groups, always ready for a walk and a long conversation in Hyde Park or an espresso at Orsini, a text to remember a family event that you were almost certain he would not remember, a well-made and well-chosen toy for my son, always a chocolate Santa left mysteriously on the desk at Christmas, and his absolute insistence on walking out of the building with me at the start of a long trip or vacation, to say good bye properly. He was a big thinker, and a restless spirit, but above all he was a great person." 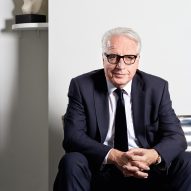