London-based studios DK-CM and The Decorators created this pop-up polycarbonate events space to test the waters for long-term cultural programming in the Thames-side town of Erith.

The pavilion is located on the waterfront of Erith, a town on the outskirts of Greater London in the borough of Bexley. Made of pink and blue polycarbonate, the Erith Lighthouse was designed to serve as an event and dining space that would draw people to the riverbank over the late summer months.

Architects DK-CM and design studio The Decorators collaborated from the onset, conducting a strategic study for Bexley Council into the potential of temporary projects for the area – from which the idea of the Erith Lighthouse emerged.

"Out of all the projects that we proposed in that study, the idea of placing a distinctive structure for dining and events right up against the Thames was the most popular," DK-CM co-founder David Knight told Dezeen. "We were subsequently commissioned to design and deliver the pavilion, with The Decorators taking care of curation and programming."

Together with the council and the Greater London Authority, the studios set out to create a "distinctive" demountable structure housing a small catering kitchen and dining space that could be moved to different sites around town.

The pavilion the studios designed for this purpose is an adaptable structure that folds open on all four sides. Its colourful walls are made of translucent polycarbonate, so the whole structure glows from within at night.

"We wanted to make a building that could communicate across long distances, and be seen from across the town," said Knight. "It should feel like a cross between the Fun Palace and the Teatro del Mondo – two very different precedents which are united by their theatrical quality."

Existing theatre rigging systems were incorporated into the design to make the pavilion as easy to erect in new locations as possible.

As well as recalling lighthouses, the pavilion is meant to reference the lightweight industrial buildings typical of the Erith waterfront. However, it's essential purpose harks back to a time before industry took over the waterfront, when it was lined with pubs and clubhouses.

"One hundred and fifty years ago, Erith was a place of pleasure, with hotels, yacht clubs and pleasure gardens stretching along the riverbank," continued Knight. "Since then, it became a place of industry, and the riverside is now a very industrial edge, with the town feeling very cut off from the river."

"As well as bringing people up close to the Thames, we wanted to make a building which evoked Erith's history as a place of riverside industry and riverside leisure."

The Erith Lighthouse is hosting a cafe, events and a dinner series by guest chefs throughout August and September, with the view to testing the market for more permanent programming of the kind in the area. Knight describes the response so far from locals and visitors as "overwhelmingly positive".

A designer and author, Knight founded DK-CM together with architect Cristina Monteiro in 2012. The studio focuses on architecture, planning and research projects.

Its collaborator, The Decorators, is a multidisciplinary design studio that specialises in working with local authorities and public institutions in areas undergoing regeneration.

Polycarbonate plastic has become an increasingly popular building material, and has lately been seen in everything from the research lab for world-leading restaurant El Bulli to the glowing Norwegian boathouse Naust V and a temporary home designed for people in abandoned buildings. 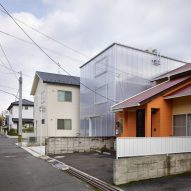