Oslo studios Koreo Arkitekter and Kolab Arkitekter have transformed an old boathouse on Norway's west coast into a summer house that becomes a glowing beacon by night (+ slideshow).

The structure has the same simple profile as before, with a symmetrical pitched roof and large waterfront doors. But it is now almost twice as long, with a new facade that combines pine slats and sections of translucent polycarbonate plastic.

By day it looks entirely wooden, while sections of the walls and roof glow at night.

Named Naust V after the Norwegian word for boathouse, the building is located in a small fishing village called Vikebygd. Koreo Arkitekter and Kolab Arkitekter were jointly commissioned to convert it into a space more suited to leisure than storage. 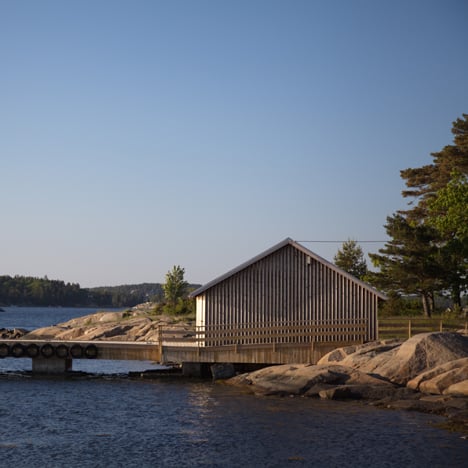 It follows in the footsteps of similar projects, including a folding summer house in Aure by TYIN Tegnestue and a camp dormitory in Hudøy by Snøhetta.

"Traditionally built as a place for storage of boats and fishing equipment, the naust used to be functional buildings with simple materials," said the design team.

"Today, as dependence on the sea and fishing industry is declining, many of them are being transformed for leisure purposes."

"As the Norwegian coastline is considered common property, regulations are very conservative regarding size, use and appearance," they added. "The dichotomy between the regulations and new Norwegian leisure culture forces an old typology to take a new form."

The first step was to extend the building backwards, creating a new sheltered but open-air space at the rear of the cabin. The architects call it the winter garden.

The entire 40-square-metre building was then reclad. The existing part of the structure is covered in lengths of locally sourced heartwood pine, while the rear extension combines pine louvres and polycarbonate to offer varying degrees of transparency.

The translucent plastic was also used to create windows that are almost invisible during daylight hours.

"Angled wood cladding makes it both opaque and transparent," said the team. "In daytime the naust is subordinated to the local traditions [when viewed from] a distance, but unveils unexpected qualities when given a closer look."

Inside, the old and new spaces are divided by both a change in level and a wood-burning stove. The room at the front has a concrete floor surface, while the area behind is a stone patio.

Seating alcoves and shelves are integrated into the walls and both sides of the building. Space for storing firewood is also created, in a niche below a kitchen counter.

Photography is by Mattias Josefsson.