The structure and formation of our planet's layers informed the silhouettes seen in Dzhus' latest collection, which is "dedicated to the evolution of earth".

The cut of each piece, ranging from hooded jackets to high-neck dresses, is based on the way the movement of tectonic plates shaped the earth's continents.

The garments feature voluminous layers and gatherings, and are designed to fold and fasten in a number of ways – allowing wearers to alter their silhouettes.

"The tectonic processes have been interpreted in the architectural cut of the designs: like the continents split and reunite, the construction of the apparel disintegrates into modules, which then reorganise into new forms, celebrating the infinite cycle of nature," Dzhus creative director Irina Dzhus told Dezeen.

"By changing their shapes and silhouettes promptly, the pieces adapt to different purposes and weather conditions, which cannot be overestimated in modern reality's overwhelming rhythm."

To replicate the rough textures of earth, rock and fossils, the designer chose to use felt, denim, knit and wool fabrics.

"These appeal to the primordial relief of the planet and the ancient solids, which have made a crucial impact to the global industrialisation," she said.

"Associated with fossil prehistoric organisms, the collection carries a message about the fragility of material existence, the value of remembering our roots and the importance of living in synergy with nature," she continued.

Dzhus, who is from Ukraine, started her eponymous brand in 2010. She cites her main areas of inspiration as being "spirituality and technology", whether it be ancient iconography or industrial uniforms.

"These objects embody certain social, psychological aspects that balance on the edge of mental and spiritual perception," she said. "I deeply analyse an object that inspires me, extract the crucial details, interpret them and, using these modules, construct a utilitarian product with an artistic soul."

Previous collections created by Dzhus have been similarly functional and angular. The 2013 Overground range included concrete cuffs and the 2015 collection featured garments made from folded felt – designed to reference 20th-century totalitarianism. 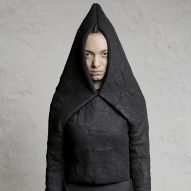 Nihilism clothing by DZHUS can be folded into different austere shapes