This steel-and-glass box perched above an abandoned limestone quarry in West Virginia is designed by Wiedemann Architects to provide a living space and workshop for a Parisian sculptor.

Completed in 2015, the Hawk's Nest home and studio encompasses 2,100 square feet (195 square metres). "Our goal was to create a simple form that was simultaneously separate from and intertwined with nature," said Wiedemann Architects.

Two concrete pillars rise our of the rugged topography to support a longitudinal volume made of glass and steel. The larger pillar located to the west contains a metal workshop. The smaller volume contains the staircase that serves as the main access to the home.

A courtyard area is framed by these two boxes, which act as "a perch for the steel and glass structure above". An ipe wood walkway connects the two volumes, giving them a sense of continuity.

A flight of steps leads to the generously glazed living area, which provides panoramic views of the quarry. "The grid of steel columns modulates the space and creates framed views of the ever changing play of nature, blurring the line between inside and outside," said the studio.

The eastern end of the home is occupied by the resident's studio, where it benefits from natural light from three sides. "The steel and glass volume provides an armature for a greater appreciation of the natural beauty of the landscape and inspires the client's work in her ceramic and metal studios," said the firm.

The central portion of the property contains an open-plan kitchen, living and dining room. The house's narrow profile makes it possible for all spaces to be cross-ventilated, which offsets the need for mechanical cooling systems.

To the west, the master suite mirrors the studio. The artist enjoys their own ensuite, as well as a walk-in closet tucked away in a corner of the room.

A guest bedroom is also included, located to the south. It is accessible from the living room, but is not part of the main home, providing visitors with more privacy.

Next to the master bedroom, a steel balcony juts out over the ravine below. From this vantage point, views are afforded of the river running at the bottom of the quarry.

The architects faced several challenges while designing for such rough terrain. "An uneven surface was littered with rocks and boulders discarded from when the quarry was active," they said. "In addition, the foundation design had to contend with subsurface caves, active springs, and fractures."

Despite this, the team sought to disturb the site as little as possible, which led to raising the home on its two concrete supports.

The interiors are modern, and the monochrome surfaces that make up the majority are contrasted by bright red accent walls, or sliding doors that can be hidden away.

"Ipe, allowed to weather naturally, provides a material counterpoint to the steel and was used on rainscreen walls, on balconies that extend the interior space, and on bridges that leave the site otherwise untouched," said the architects on their choice of wood variety.

Wiedemann Architects also described the home as "of the place", and a response to their client's artwork.

Other projects that provide artists with space to live and work include a photographer's loft in New York City overhauled by Desai Chia, and a Californian estate based on barnhouse typologies in Sonoma County by Mork-Ulnes.

Photography is by Anice Hoachlander at HD Photo. 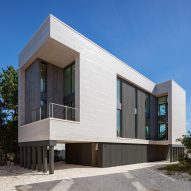