Mork-Ulnes Architects has completed a barn-inspired artist studio in northern California, which includes a white volume that looks like it is growing out of a reclaimed timber-clad building.

Situated on a farm in Sonoma County – a scenic region known for its wineries – the project was completed in two phases over the course of six years. It is located in the town of Sebastopol, about an hour north of San Francisco, and was built for a creative couple with Norwegian roots.

The main structure is a 2,500-square-foot (232-square-metre) building that houses an artist studio, a storage area and an office. Called the Artist Studio and Workshop, the phase-one project was constructed for just over $140 per square foot (£106).

The building's form and materials recall a dilapidated barn that once stood on the site but had to be demolished.

"Using the barn typology had an instant appeal," said Mork-Ulnes, which has offices in San Francisco and Oslo. "The main challenge became to create an ideal art studio within the barn vernacular."

Clad in salvaged barnwood, the new structure has the same footprint as the razed barn. It features a butterfly roof made of weathering steel and supported by wooden beams.

By inverting the traditional gable roof, the architect was able to create a distinctive building that references its pastoral context.

The structural system consists of a wooden frame combined with steel moment frames, which "allow for the large utilitarian openings and spans required to manoeuvre tractors and artwork in and out of the building".

Inside, operable windows usher in natural light and facilitate cross ventilation, while also providing outward views of the property.

Interior walls are sheathed in plywood, a material choice that was influenced by budgetary constraints.

For phase two, the architect created a 718-square-foot (67-square-metre) addition for cooking and eating that "grows out from the studio," earning it the nickname Amoeba. 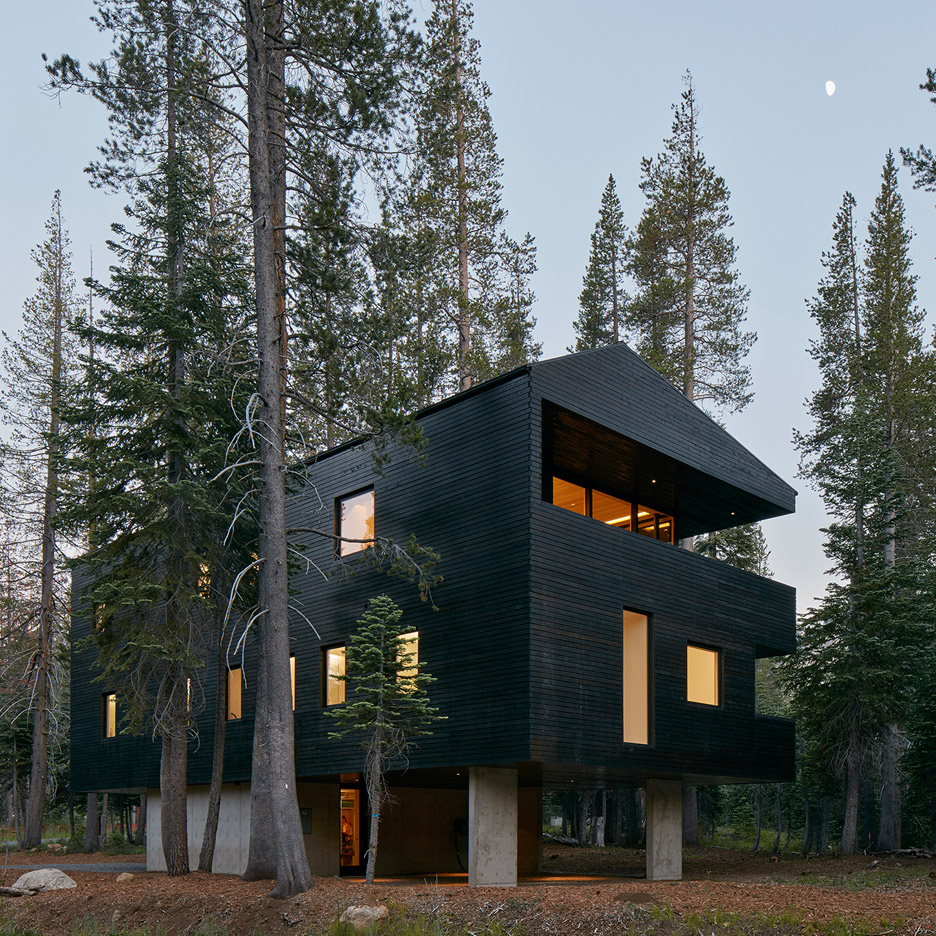 "It provides a loose and organic counterpoint to the more rigorous barn structure it extends from," the architect said.

The extension is defined by curved concrete walls that are eight inches thick (20 centimetres). Their thermal mass insulates the room on chilly days and keeps it cool during the summer.

"The walls were formed by spraying layers of Shotcrete cement onto screens of recycled barn wood siding," the studio explained. "When the concrete had dried, the boards were removed, thus exposing the familiar wood texture."

One side of the extension features a retractable glass wall that enables the space to be fully open to the outdoors. The roof is punctured with a large skylight that brings ample daylight into the space.

Inside, a garden sits between the kitchen and dining area. According to the architect, the client wanted the extension to have a jungle-like feel.

"It embraces nature and the outdoors, literally capturing the landscape to create a lush interior garden of taro, fig and bamboo that softly separates the kitchen from the dining area," the studio said.

For this project and others on the property, Mork-Ulnes Architects closely collaborated with the homeowners: Lars Richardson, a Scandinavian art and antiques dealer, and Laila Carlsen, a painter.

The firm's next project for the site is a new pool and pool house, slated to be built in front of the dining pavilion.

Other artist studios in the US include a writer's hideaway in rural New York clad in black-stained cedar and a Minimalist "studio in the trees" on a vacation island in Massachusetts.

Photography is by Bruce Damonte unless otherwise indicated.