Canted walls covered in colourful louvres define this urban building for Northeastern Illinois University by architecture firm JGMA, which sits next to a major highway.

The El Centro facility is part of an urban satellite campus established by Northeastern Illinois University (NEIU) to help serve the Latino community.

Occupying a former industrial site in Chicago's Avondale neighbourhood, the building sits alongside a major highway and near a metro rail line. The project is expected to help spur more development in the area, which has a large Latino population.

"These key components of community and infrastructure will support the campus as it evolves, which will in turn encourage the area to become more business, pedestrian and bicycle friendly," said JGMA, a local studio led by architect Juan Gabriel Moreno, who was born in Bogotá, Colombia.

The building's footprint, which is loosely L-shaped, responds to the irregular geometry of the site. The north elevation faces a parking lot, while the south and west facades overlook a busy expressway.

Sculptural in form, the glass-walled building is wrapped in vertical louvres painted blue and gold, the university's official colours. The angled fins provide protection from the sun and the rumble of passing cars.

"Unlike a billboard, the architecture asserts its presence, not through shameless advertising, but through twisting roof forms and the bold NEIU school colours prominent on the vertical louvres rhythmically arrayed along the building's facades," said JGMA.

"The building's sculptural form and vibrant facade are layered with intent reaching far beyond their superior marketing capabilities."

Inside, the three-storey structure contains light-filled classrooms and interstitial spaces for casual interactions. The ground level contains a double-height lobby, a student resource centre and an art gallery. In the entrance zone, the team incorporated a sculptural white reception desk, polished concrete flooring and a small, theatre-style seating area.

A wood-enclosed stairwell leads to classrooms on the second and third floors. The top level also contains a lounge and outdoor terrace. "The building culminates at the student lounge, where the ceiling sweeps upward, drawing your view to the Chicago skyline and pulling you outside to a lush green terrace," the team said.

Pops of colour are incorporated throughout the facility, from bright carpet tiles to green-hued chair upholstery. In one corridor, exposed pipes were painted purple and orange.

"The NEIU El Centro campus is a project completely engrossed in and belonging to its location and community," the architect said. "It also reinforces Chicago's identity as a city rich in educational and architectural cultures."

The city is gearing up to host the second Chicago Architecture Biennial, which opens 16 September 2017. Under the theme of Make New History, the biennial will focus on the efforts of contemporary architects to align their work with versions of the past. Over 100 participants from around the world will be involved in the event, which runs through 7 January 2018. 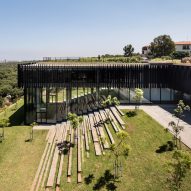