The huge metal dome topping French architect Jean Nouvel's Louvre Abu Dhabi has been captured in new images, which have emerged on Twitter ahead of the building's opening.

French Ambassador to the UAE Ludovic Pouille shared the photographs of the museum on Twitter during a visit to the museum last week.

The photographs capture the most striking feature of Nouvel's design – a huge domed roof that measures 180 meters in diameter.

#DYK the design of @louvreabudhabi dome was inspired by palm leaves, the material used for traditional roofs in #UAE?https://t.co/sSe6dEpUUv pic.twitter.com/xPMulYo73r

The metal lattice structure comprises 7,850 overlapping star shapes. Pouille's photographs also offer a preview of the roof from the inside, where it is intended to cast a dapple light across the gallery spaces. Nouvel describes this features as a "parasol creating a shower of lights".

The Louvre Abu Dhabi museum, which is scheduled to open on 11 November 2017, is located on an archipelago off Saadiyat Island, a man-made island of the coast of the United Arab Emirates capital Abu Dhabi.

Another image shared on Twitter by Abu Dhabi Urban Planning Council, shows the building surrounding by water, with pools between its white block walls and underneath the roof.

The Louvre Abu Dhabi forms part of the island's cultural district called the Saadiyat Cultural District, on its western side.

Amazed by progress made by great teams working 24/7 on the @LouvreAbuDhabi 1st Universal Museum of the Century! Opening soon! @FranceEmirats pic.twitter.com/1FF4HM1tIU

It will be accompanied by a series of arts and cultural buildings, including a new outpost of the Guggenheim, designed by Frank Gehry, and the Foster + Partners-designed Zayed National Museum.

The museum was originally intended to be completed in 2012, but this date has been repeatedly pushed back.

Jean Nouvel, who ranked at number 40 on the Dezeen Hot List, also recently unveiled a series of furniture for the building, with curbed forms intended to resemble the roof shape. 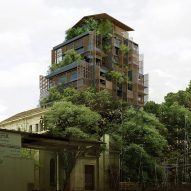