The photographer travelled to the coastal Chinese city, which contains one of the world's biggest ports, to capture the progress of the Rogers Stirk Harbour-designed residential tower complex, Ningbo Gateway, and three Schmidt Hammer Lassen projects: Ningbo Home, Ningbo Daily and Ningbo Library.

Goodwin encountered a series of challenges on the shoot, including severe rain and the volume of surrounding construction sites, which he described as "not the stuff of standard architectural photography".

But he said that these difficulties allowed him to be more adventurous than usual. His images include the surrounding construction sites and workers, as well as Ningbo locals, who are often situated in the foreground, obstructing views of the building in the backdrop.

"With these images I hoped to capture the atmosphere of the place and not go the standard route," Goodwin told Dezeen.

"That was possible in part because these are progress shots and hence could be a bit rougher than usual, and partly because Schmidt Hammer Lassen Architects and Rogers Stirk Harbour + Partners were willing to let me take risks," he added.

One shot captures a local man fishing in front of the residential towers of Ningbo Gateway, while another shows workers wading through the canal behind Ningbo Daily – the new headquarters for the Ningbo Daily newspaper.

"I hope to have captured how moving each scene was in those two images," he said. "But you can't feel the heat and humidity that nearly knocked me over when I stepped out of the hotel!"

Rogers Stirk Harbour + Partners' Ningbo Gateway building is the most complete building in the set. Located in Hangzhou Bay, the pair of stepped residential towers feature jagged, red balconies at the corners. Goodwin shot these against a backdrop of the cityscape both during the day and at nighttime.

Goodwin chose to shoot the Schmidt Hammer Lassen-designed Ningbo Home of Staff – a vast cultural centre, with conference and office space for Ningbo's Labour Union – from afar. Different angles show the huge curved corner at one end and the roof terraces staggering down on the other side.

"The Home of Staff was so big you could hardly take it in as one building," the photographer explained. "Walking from end to end to shoot it was something of a challenge in itself!"

As works progress on the Ningbo Library, Goodwin has documented the vast scaffolding skeleton, and a construction worker in front of a series of upturned wheelbarrows and plastered walls.

To create each image, the photographer took between two to 18 shots, which were later stitched together. These were then processed with Hasselblad Phocus or Capture One, and final touchups were added in Photoshop.

Ningbo is located just south of Shanghai, on the opposite side of Hangzhou Bay. The city is also the home of Wang Shu's Ningbo History Museum, built in 2008 from recycled materials. 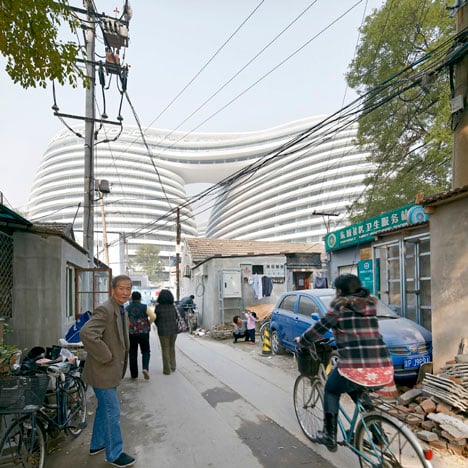