Completed in 2008, the Ningbo History Museum is a 30,000-square-metre building located in the city of Ningbo in Zhejiang province, China.

The three-storey museum's distinctive facade is largely composed of debris collected from the surrounding area, where traditional Chinese towns and villages were demolished to make way for new developments.

"Originally in this area there were about thirty beautiful villages and they demolished every village," Wang says in the movie, which Dezeen filmed at the Royal Academy in London. "Everywhere you go, you find ruins of buildings that have been demolished."

"But everywhere there are materials, beautiful materials," he continued. "So I wanted to build this museum for the people who were originally living here so they can keep some memories."

The walls of the Ningbo History Museum feature a wide range of recycled bricks and tiles – some of which date back over a thousand years. 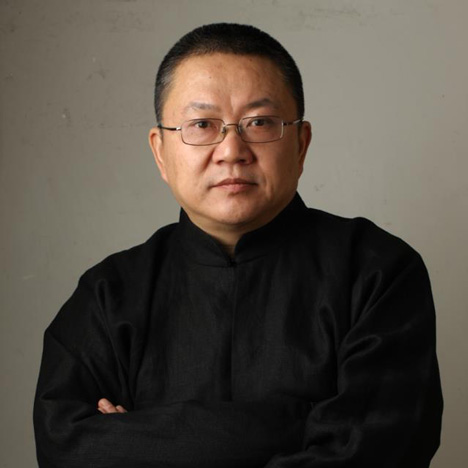 The museum was constructed using a traditional technique called wapan, in which multiple elements of different sizes are packed together to create a stable structure.

"We worked together with craftsmen to work out how to use so many different kinds of recycled material in the new museum," Wang explains.

"Tradition should be lived. Once you put it into a museum it means the tradition has died. So that's why I worked with local craftsmen."

Wang also used large amounts of concrete in the building to contrast with the recycled elements, with the two different materials often meeting in the same wall.

But the use of bamboo moulds to cast the concrete means the building is more than just a simple juxtaposition between old and new, Wang says.

"It's two things very directly combined together," he explains. "But the modern part is not just modern."

"On the huge concrete walls you will find a very rich bamboo texture, while the use of traditional recycled materials has a relation to tradition, but it's used in a new way."

Ningbo History Museum is one of Wang's best-known projects, along with the China Academy of Art in Hangzhou.

He founded Amateur Architecture Studio together with his wife, Lu Wenyu, in Hangzhou in 1997 and was awarded the Pritzker Prize in 2012, becoming the first Chinese citizen to receive the honour.

In July, he delivered the prestigious Annual Architecture Lecture at the Royal Academy in London, where this movie was filmed.  The lecture was broadcast live on Dezeen, but you can still watch it here.