Kyriakos Tsolakis Architects has won planning permission for an astronomical research centre on top of a Cyprus mountain, which will provide NASA with information about celestial phenomena.

The architecture studio, which has offices in Nicosia and London, drew inspiration from science-fiction movies for the design of the Troodos Observatory, or "star observatory".

It will be built 1,200 metres above sea level in Troodos Geopark – a 115-hectare, UNESCO-listed park containing mountains covered with forests, fields, orchards and vineyards.

Studio founders Nicodemos K Tsolakis and Elena K Tsolakis describe the building as "a foreign object within a very natural organic setting", which should "inspire and excite anyone who sees it from afar or from up close".

"Elena and I drew inspiration from sci-fi when drawing up plans for this observatory – I was a Star Wars fan growing up," explained Tsolakis. "Of course the client didn't know this when they hired us. They were pretty surprised with where we took it but they love the ideas."

Troodos Observatory is set to become the first purpose-built observatory in Cyprus. It will collect data to share with NASA, which is currently unable to track celestial phenomena between India and the Mediterranean.

The building will feature a slender, wedge-shaped form, with a dome roof at one end, and a cantilevered roof terrace at the other.

It will contain two telescopes – one better suited to daytime use, and one for night. Visitors will also be invited to bring their own telescopes up onto the roof terrace, so they can also participate in stargazing.

Structurally, the building will be designed to withstand severe temperature fluctuation – from 40 degrees centigrade in summer to below freezing, with snow in winter. 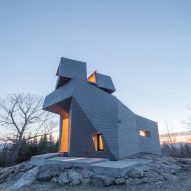 Visualisations are by MIR, apart from where otherwise indicated.