An angular pair of towers located directly outside London's Victoria station has been named the UK's worst new building from the last year.

The Nova Victoria mixed-use development, designed by PLP Architecture, was awarded the 2017 Carbuncle Cup – an annual competition organised by architecture website Building Design (BD) that recognises the ugliest buildings to have been completed in the UK over the past year.

The panel felt that PLP had tried to emulate the angular styles of Frank Gehry and Daniel Libeskind – but had done so with little success. 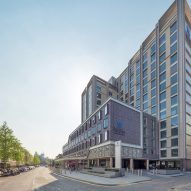 Croft described the building, which is the first thing you see upon leaving the underground station, as a "crass assault on the senses" that made her want to "cringe physically".

Rudlin, director of Urbed and chair of the Academy of Urbanism, said the development was inefficient – but blamed the red spire on its south tower for its newly awarded "carbuncular status".

"There's no variety and you can't read the floors," he said. "It's got the same proportions as Salisbury Cathedral. For me the spire gives it carbuncular status – otherwise it's just a bad building."

The Nova Victoria development comprises two 18-storey office buildings and a residential block. It overlooks nearby Buckingham Palace, and makes up part of Land Securities' wider masterplan for the Victoria area.

It features a red-coloured facade, which the judges felt was an attempt to "jazz up" the building's monolithic nature.

"The architect, PLP, has attempted to break up the monolithic nature of the scheme by expressing it as a pair of sliced and chamfered towers and jazzing it up with several bright red prows presumably to give it that 'landmark' quality," they said in the shortlist announcement.

Half of this year's nominees were in London, where several key areas including Victoria and Battersea are undergoing drastic regeneration.

The Park Plaza London Waterloo by ESA Architecture and an obtrusive scheme by London studio Simpson Haugh, which is part of the redevelopment of Battersea Power Station, were also in the running alongside Nova Victoria. 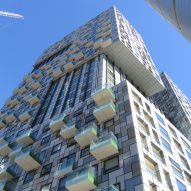 "It is unfortunate although not entirely surprising that a London building has won the Carbuncle Cup for the sixth year running," said BD. "The capital is in the middle of a massive construction boom so there is a bigger pool of potential contenders."

The other three projects to complete the shortlist were student halls of residence in Portsmouth, Hampshire, an extension to a home in Malvern, and a new entrance to a rail station in Preston, Lancashire – which was the BD readership's most hated building, with 78 per cent saying it should win.

Past recipients of the Carbuncle Cup have included Rafael Viñoly's Walkie Talkie skyscraper in London, a student housing scheme that was deemed "prison-like" by the 2013 jury, and a tower block that was described as "an open invitation to commit suicide".