Set to open next week, the second Chicago Architecture Biennial will show "a cross-section of the best and most innovative work from around the world" according to Mark Lee, who has steered the direction of the event along with partner Sharon Johnston.

The programme will follow on from where the inaugural event left off, with an emphasis on the past, which Johnson and Lee noticed as participants in 2015 as a core theme that emerged.

"Overall, the biennial is looking back to look forward," Lee told Dezeen. "We thought history was an important way to re-think its relationship with practice today."

"We are among younger architects who don't have the full context of history that the previous generation had before," he added. "History as a crude body of knowledge that one can tap into."

Within the broader theme, sub-categories will include building histories, material histories, image histories and civic histories.

Johnston and Lee believe the last of these four will be particularly important in sparking discussion around key issues affecting the US today, including the role of Confederate monuments in American towns and cities.

Last month, Dezeen columnist Phineas Harper said that the architectural community has so far approached calls to remove hundreds of these monuments – following a fatal white-supremacist march in Charlottesville, Virginia – "with deafening silence".

"It's questionable about how architecture directly can solve social conflicts," said Johnson. "But I think what's important is that we engage in conversation. We want to bring people together of different perspectives, of different generations."

The Chicago Architecture Biennial opens to press and professionals on 14 September 2017, and to the general public from 16 September 2017 to 7 January 2018. 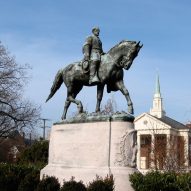 Read an edited version of the transcript from our interview with Johnston Marklee below:

Dan Howarth: How did you decide on the theme of Make New History for the second Chicago Architecture Biennial?

Mark Lee: We were participants in the first biennial, and we saw lots of themes that were happening. One of them was this interest in history, and then we thought history was an important way to re-think its relationship with practice today.

We are among younger architects who don't have the full context of history that the previous generation had before. History as a crude body of knowledge that one can tap into.

Dan Howarth: So it's moving on from the first biennial?

Sharon Johnston: We really see our work in relationship to the first biennial, and hopefully the conversations that will follow, and subsequent exhibitions, will introduce a set of aims that are part of a continuum – defining a set of questions of a decade perhaps.

Mark Lee: The thing typically people think of with biennials is symbolic events. But we like to think of a series of biennials as continuous events. Like with a progression of three of four biennials, you can look back and begin to describe what happened in that decade.

Dan Howarth: History is a very broad topic. Is there anything specific within that theme you'll be focussing on?

Mark Lee: We've tried to have a different type of categories within Make New History. One is building histories. I think certainly people are looking back at the history of how buildings have evolved, and what is happening now, or what could happen in the future.

The other category is material histories. I think that people are more interested now, not just in the buildings themselves, but where the materials came from, the fact of sustainability of materials, and the whole process of how material history happens.

And the third category is image history. As architects, we produce buildings as well as representations of buildings, whether it be the collages of Mies van der Rohe, to the digital production that's being done today.

Then the last is civic history, which pertains to a more urban scale. So as not just the buildings themselves, but how buildings as a collective form an urban or city scale.

Dan Howarth: Is there an element of postmodernist thought behind it?

Mark Lee: Indeed. Postmodernism is maybe the most recent episode in modernist history, when history came back as an important factor. But we like to think of it within a larger scope.

We think of the Novecento in Italy in the 1920s, or the rationalism to happen between the wars, or the reconstruction of the European cities in the 50s.

There are many episodes where, within the history of modernism, history came back. Postmodernism is perhaps the most recent, and also there's a pop element that was more present in postmodernism, whereas in the early movements, there's a certain seriousness and a certain sense of urgency.

Overall, the biennial is looking back to look forward.

Dan Howarth: How do you think being an LA practice has affected your take on an event in Chicago?

Sharon Johnston: There's a certain kind of energy of being an outsider coming to a city. We're completing a renovation of the MCA in Chicago, and we've been involved in some work at the University of Chicago.

So on the one hand, I think we know the city, but also we're foreigners. A biennial at this scale has nearly 140 participants – there's certainly many people from Chicago, but it's a very global conversation.

We hope the full freedom of being a little bit "insider" and a little bit "outsider" will allow for a kind of more expansive – maybe unbiased – discussion about not only of what's happening in the city, but how a global conversation about how design and the future of cities and buildings can take place in a city like Chicago.

One of the interesting challenges and qualities of this biennial, and what distinguishes it from many others, is that it takes place in the heart of the city, in a functioning city building that is a cultural centre.

It's exciting that we have 500,000 visitors expected to show, so there's a kind of different notion about audience that is both for insiders that are coming just to see the show, and for outsiders that might even hop off the street. That kind of scale of engagement is something that we hope to tap into and expand on.

Dan Howarth: The first Chicago Biennial drew double the visitors of the 2014 Venice Architecture Biennial. Why do you think it was so successful?

Mark Lee: Certainly there's a freshness to being the first one – there's a lot of curiosity in the first biennial of this scope in North America. Secondly, there's a general interest in architecture in Chicago.

We were participants in the first one, we went through the opening and visited subsequent times. Every time we went, it was packed with people – people of different ages, people with kids, or people that were just generally interested in architecture, as opposed to Venice or many other places where a lot of the events that happen during the opening week, but when you go in the subsequent months, it's much quieter.

Dan Howarth: A lot of these types of events take place all around the world. Do they become irrelevant when every city has one?

Sharon Johnston: Part of our interest in a relevance for this biennial was also to engage in a conversation about themes, precedents, and paradigms in Chicago that have resonated globally, so that it becomes relevant place to discuss, for example, the conversation of the skyscraper or the tall building, originated largely in Chicago. We've asked a group of architects to re-think that question in a context of the Chicago Tribune Tower competition as an example.

We wouldn't say that every participant is engaging in the history of Chicago, but we certainly have layers of the show that are engaging the history of the city, and in that we way hope it brings a certain relevance to this program that perhaps would be less relevant in other biennials around the world.

Dan Howarth: How important was achieving international diversity and gender parity when coming up with the programme and participants list?

Sharon Johnston: Having diverse voices is really important, so that was just a starting point for us. Then the kind of spectrum of participants from different countries, and genders, just evolved from there.

It wasn't like we weren't meeting quotas, we just wanted great work, and we wanted diverse work. When those are your two goals, that's what you get. You get a lot of different voices, and you get men and women.

Given that this is a new program, we are building on the legacy of the first biennial that we not only were looking generally speaking at, perhaps, younger generations of practitioners and also perhaps practitioners, that whether it's that they haven't had the chance yet to design a building, or maybe that's not the kind of practice that they envisioned.

New modes of practice was something that we thought relevant for the Chicago biennial, especially in its own stages in its early history.

Mark Lee: The biennial will be a cross-section of the best and most innovative work from around the world.

There's a general interest in architecture in ChicagoMark Lee

Dan Howarth: Given the recent events in Charlottesville and across the US, what do you think the architecture community can do to prevent this type of thing from happening?

Mark Lee: We are not sure if the biennial, as a body, should address this all together. We think it more would be in the better interest of individual architects, as opposed to us putting it together as a theme. We think social concerns are important, but we are also wary of how the role that architecture plays has often been overestimated.

Sharon Johnston: One layer of the biennial that a number of architects are questioning is how to understand civic history, both historically and today. What's important is that we look at these questions of cities, and civic-ness and community from a number of different voices.

Architects generally think about space. It's questionable about how architecture directly can solve social conflicts. But I think what's important is that we engage in conversation. We want to bring people together of different perspectives, of different generations.

The particular theme of civic histories perhaps relates in a way most directly to this question. What we found most interesting about the architects who we will bring to the biennial, who are thinking about cities, is that they are looking at cities, and mapping cities, and finding techniques of imagining future cities from the perspective of individuals, or collectives.

So perhaps this top-down mandate of the ways we might imagine the future of cities is evolving to a more collective, more diverse set of voices that build up a conversation, as opposed to top-down policy making.

We aren't sure where that leads, but I think what Mark talked about, of creating a social space – an environment to come together in a biennial is a very potent place to ask questions. There will be a lot of strong programming around this biennial that we think would be good place to talk about these things, even if they're not solved.

More generally we do a lot of work in cultural buildings and museums, and I think more and more the cultural space is becoming a vital environment to talk about these questions, and perhaps begin to expand out from there about ways of building bridges.

Photograph of Sharon Johnston and Mark Lee is by Eric Staudenmaier. 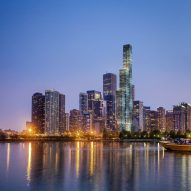