Architects and designers were out in force at this year's Burning Man festival, and are posting photo diaries of the event now that they've returned from the Nevada desert.

The designers were among the 68,000 revellers who set up a temporary city and built a wide variety of artworks on the sand between 27 August and 4 September 2017.

Back on the grid after the festival, they have been posting images of their experiences on Instagram.

One of the most sizeable visual diaries was posted by Danish architect Bjarke Ingels, who uploaded over 20 images and videos documenting his trip to Black Rock City.

The BIG founder's pictures include some of the temporary architectural structures, Mad Max-style vehicles, glowing installations, and scenes of the ritual burning that happens at the end of each festival.

Designer and Fuseproject founder Yves Behar used the occasion to get married. The ceremony took place at the wooden Aluna structure designed by Colombian architect Juan David Marulanda, and the bride Sabrina Buell wore a paper dress by N.I.C.E. Collective.

Ralph Nauta from Amsterdam-based Studio Drift travelled to Burning Man to work on the Tree of Ténéré installation, which used the studio's Flylight technology to create responsive light patterns across the leaves of an artificial tree.

Nuata posted images of the installation under construction, and at various points in the day once complete.

Among first-timers was Alexander Josephson, co-founder of Toronto design company Partisans. He accompanied his images with detailed captions describing what he saw and how he felt about the experiences.

Josephson explained how "Burners" are greeted upon arrival with "a real hug that lingers" from veteran volunteers, before performing burpees on the dust and ringing a bell.

A post shared by Alexander Josephson (@alexanderjosephson) on Sep 3, 2017 at 4:16am PDT

"There are so many more photos and sentiments that I wanted to share here with all of you," he said on the final photos in his series. "The main one is that burning man is and is not what anyone thinks it is."

Also in attendance was New York industrial designer Kickie Chudikova, who shared images of the desert landscape shrouded in dust, which made for spectacular sunsets.

Burning Man has taken place in the Nevada desert each year, since founder Larry Harvey moved the festival from a California beach in 1991. In a 2015 interview with Dezeen, Harvey spoke about the "stunning achievement" of creating a high-density, car-free festival in a remote and inhospitable landscape. 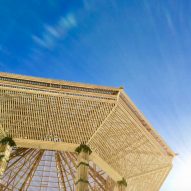 Last year's attendees included creative director PieterJan Mattan, who selected his favourite temporary structures for Dezeen. Photographer NK Guy has been documenting the creation and destruction of the city with his images since 1998.