Stefano Boeri's proposal to use trees and planters to protect against terror attacks instead of "ugly" military-style barriers is to be implemented in Florence, mayor Dario Nardella has announced.

The Italian architect voiced his concerns about the negative impact of the barriers being installed in European cities following the recent vehicle-led terror attacks in Barcelona, London, Nice and Berlin.

Earlier this month Boeri attended a workshop with Nardella and a group of architects at Florence's town hall, the Plazzo Vecchio, to discuss how his idea for tree-filled planters could be implemented to protect public spaces in the city.

"The safety of these places is urgent and appropriate, but we cannot allow safety to transform thousands of squares and public spaces in Europe to become sites of barriers and concrete blocks, as if they were military checkpoints," said Boeri in a statement following the meeting.

Nardella hopes that cities across Italy and Europe will follow Florence's lead.

"We must not give in to the blackmail of terrorists and let our city be turned into military bunkers," said Nardella.

"We need more security without sacrificing the beauty and identity of our cities," he added. "This is why we continue with plans to defend the city with planters and equally effective solutions, instead of ugly concrete barriers."

"I think Florence has a responsibility to embody the role of a symbolic city, where we must combine the security of our citizens with the beauty of the city."

Last month Italian news site ANSA reported that a row of "anti-terror flower pots" had already been installed outside the Quirinale Palace in Rome following the attacks in Barcelona.

Boeri, who is known for his plant-covered architecture, also proposed a range of street furniture – from benches to bicycle racks  – which would not only provide barriers to vehicle-led attacks, but also improve the functionality of public spaces in the city.

"They will operate as useful elements of urban furniture – benches, bicycle racks and smart device stands – and will be designed as modular elements, assembled in order to ensure maximum flexibility in relation to the different types of public spaces to be secured," he said.

Boeri added that these would also encourage public gatherings like those terrorists sought to prevent.

"Meeting places, festivities and exchanges of culture are exactly the values that the beasts of fundamentalist terrorism would like to erase.  The answer we must give to the grim hatred of terrorism must be security and serenity," he said.

"We mustn't give a small group of killers the satisfaction of having annihilated the beauty, social and cultural vitality of thousands and thousands of European markets," Boeri added.

"The purpose of these attacks is to intimidate us, to lock us into our private homes, to turn people away from Europe's beautiful public squares and spaces."

Following the meeting, Boeri and Nardella held an online conference with representatives from other European cities to discuss proposals and methods for promoting these ideas.

"Our response to the hatred of terrorism is in art and beauty," said Nardella following the conference. "We can not afford [for] terrorists to distance us from public places, from our open and beautiful spaces, from the our historical squares. We do not want to transform our squares into [sites of] anxiety and barred areas of barriers and blocks cement."

"The message that Florence, capital of humanism, launches to the creators and cities of all the world is not accepting blackmail," added Boeri. 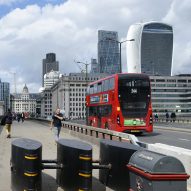