Italian studio Stefano Boeri Architetti has adapted its Vertical Forest concept for a pair of skyscrapers in Dubai, which will be covered in thousands of trees.

Together, they will integrate 2,640 trees and 27,600 shrubs on the facades, along with "a system of greenhouses and hydroponic gardens", the studio said.

Hydroponic gardens are engineered to grow plants in a vertical formation using water-based, mineral nutrient solutions in place of soil.

According to the studio, the project has been commissioned by investment initiative Impact One to bring the benefits of "urban forestry" to Dubai.

"The project, commissioned by Impact One, represents the first Vertical Forest prototype for the MENA (Middle East and North Africa) area with the aim of integrating the benefits of urban forestry such as the absorption of fine dust particles, microclimate regulation and reduction of the greenhouse effect together with innovations as part of the management of the water system in arid climates and the optimization of energy production from renewable sources," said Stefano Boeri Architetti. 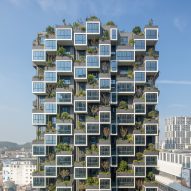 Stefano Boeri Architetti has developed a reputation for buildings that host plants since conceptualising the Vertical Forest and building its first prototype in Milan in 2014.

It has since designed vertical forests for Eindhoven, Huanggang and Egypt's New Administrative Capital, which all feature local plant species to suit their respective climates.

Vertical Forests consist of skyscrapers with planted facades, with the concept designed as a way to combine high-density residential development with tree planting in city centres.

The vertical forest towers decrease in size as they extend upwards, with jagged edges and peaks formed from projecting balconies, similar to the Valley skyscraper by Dutch studio MVRDV in Amsterdam.

According to Stefano Boeri Architetti, a key part of the project is "the management of the water cycle" and the incorporation of renewable energy sources.

The tower will incorporate a desalination and grey water recovery system, alongside photovoltaic surfaces that will contribute clean energy to the towers.

Stefano Boeri Architetti is the eponymous studio of architect Stefano Boeri, which was founded in 2011. Today its main office is in Milan, but it works from Shanghai and Tirana.

Other recent projects by Stefano Boeri Architetti include the Hanji House pavilion at this year's Venice Art Biennale and the Floating Forest on the Darsena dock for Milan design week.

The images are courtesy of Stefano Boeri Architetti.