Robotic anti-terror barriers that automatically move into position when a threat is detected could be a reality within five years, according to the deputy mayor of Paris.

"I think robotisation could be really useful," Missika told Dezeen. "I think it's realistic in five to 10 years."

Several recent terrorist attacks in Europe have involved terrorists deliberately driving trucks or vans onto pavements or along pedestrian routes, including the attack on La Rambla in Barcelona this August and a similar atrocity in Nice in July last year.

In London, police have responded to vehicle-based attacks on London Bridge and Westminster Bridge by installing heavy barriers to separate cars and pedestrians, although the measures have been criticised for causing congestion.

Meanwhile bollards linked by steel cables have been installed along the Promenade des Anglais in Nice, where 86 people died in a truck attack on Bastille Day last year.

But Missika claimed robotic barriers could provide a better and more elegant solution.

"There is some reflection among architects and specialists on how to make this system a little bit more beautiful but also more useful," he said."You can have robotisation of this kind of system of protection."

"If this kind of thing is robotised and digitised, you can imagine they can circulate in the street, go exactly to the place you need them, and then go back."

Missika, who is responsible for urbanism and economic development in the French capital, said that public buildings such as stadiums and theatres would have to be "redesigned" in the face of terrorist threats.

"For theatres and public places for events, stadiums and so on, we have to redesign them in order to make the management of the flows more secure," he said.

In November 2015, France's worst-ever terrorist atrocity saw 130 people killed in coordinated attacks at the Stade de France stadium, the Bataclan theatre and various other locations across the city.

"Since the attacks, we ask for screening in all these places and we have created queues in the public space because people are waiting to be screened," Missika said. "I think we have to reorganise all the space in order to evolve this kind of new risk."

More police in the streets

He called for better CCTV systems but said that London had become too reliant on them.

"CCTV is very important but we have not exactly the same approach as London. We think we need police in the street. The attack in Westminster showed that seeing something on CCTV is not enough. They need five, seven minutes to get to the scene. So we have to combine CCTV and physical presence in the street."

Missika spoke to Dezeen at the Maison & Objet fair in Paris last week, where he took part in a discussion about architecture in the city as part of the Dezeen x MINI Living project.

He also spoke about plans to make London and Paris "twin cities" to help both thrive economically after Brexit, and set out the differences between the two cities' approaches to urbanism.

"Unlike in London, we don't accept to give the management of public space to the private sector," he said, adding that Paris offered "the best solution" to tall buildings by restricting their development.

Top image of the Champs Elysées is by JSquish. 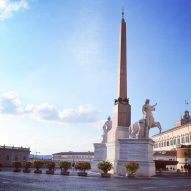