Designer Brodie Neill has worked with recycled ocean plastic to produce new furniture pieces, and used them to create a waterfall installation in a London hotel.

Called Drop in the Ocean, the installation is on show at the Foster + Partners-designed ME London hotel as part of this year's London Design Festival.

It is intended to encourage people to think more carefully about how they contribute to the vast global consumption of plastics, which has resulted in vast amounts of pollution in the world's oceans.

"I want to make people reflect on their use of single-use plastics, make them more aware of their footprint," Neill told Dezeen. "There are 5.25 trillion pieces of plastic in the ocean, so this is a drop in the ocean compared to the scale of the problem, but every bit counts."

Neill started the project by developing a material he calls "ocean terrazzo". This is made in the same way as regular terrazzo, but instead of using chips of marble or granite, Neill set hundreds of tiny pieces of plastic into a resin surface.

The designer first showcased the material in 2016, with the Gyro table he presented during the London Design Biennale. A year later, he has used it to create a new collection, called Flotsam, which includes a bench and a basin-like coffee table.

All three pieces are designed to make the waste material look like something beautiful.

"It starts off quite hideous – so brightly coloured, and mutated from what it originally was," explained Neill. "It was probably just a cheap, single-use plastic that was used for seconds, maybe a minute. But it could take potentially 500 years to degrade."

"Maybe taking something that is quite hideous and making is aesthetically beautiful is one way of bringing attention to the problem."

For the installation, the surface of the Flotsam table has become a pool of water. Every 60 seconds, a single drop of water is released from above and lands in the pool, creating a ripple effect. The effect is amplified using projection mapping, so a tidal wave appears to then flood across the surrounding walls.

Neill lives and works in London, but grew up in Tasmania. He was driven to work with ocean plastic after observing it washed up on the once pristine beaches of Bruny Island. But it is not his first experiment with recycled materials.

His Remix chaise longue was created by building up layers of recycled plastics and plywoods, then carving into them. And his recently launched Stellar Nova table features recycled aluminium legs and a sustainable bamboo top.

He plans to continue to promote use of recycled materials in his work, and particularly plastic. "As long as the plastic is kept within a cloud loop, there's no problem with the material being used, much the same as metal or glass, but we just need to change people's perception of it," he added.

Other designers promoting the use of ocean plastic include Stella McCartney and Studio Swine.

It is one of several environmentally minded exhibitions taking place during London Design Festival, such as Pentatonic's show of furniture made from smartphones, cans and cigarette butts. 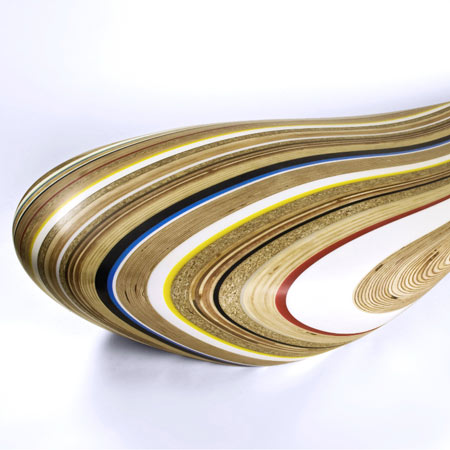