Danish textile manufacturer Kvadrat has invited 19 designers to "rethink the use" of its popular Canvas material, as part of an exhibition at this year's London Design Festival.

Kvadrat's My Canvas exhibition features 19 different takes on one of the brand's most successful fabrics, Canvas – produced by Italian colourist Giulio Ridolfo. It is taking place at London's Somerset House as part of the Design Frontiers exhibition, which coincides with the city-wide design festival.

Each of the designers created works using Ridolfo's Canvas, which the company describes as a "vibrant woollen upholstery textile". It features a palette of "in-between colours" composed of a combination of three coloured yarns, with six shades in every blend.

The Canvas colour range takes its cues from the landscape scenery of Skagen – a port town at the north end of Denmark, known to have attracted painters since the Dutch Golden Age due to its picturesque views.

"Canvas highlights how beautiful a yarn can be, and projects a strong sense of craftsmanship," said Kvadrat. "From a distance, it has the calm surface of a unicoloured textile. But, get closer, and shimmering colour nuances, delicate contrasts and an elegant structure emerge."

The exhibition was given the name My Canvas to reflect the "individual creative viewpoint" that each designer took on the fabric. The brief was set openly, only requiring that the pieces be informed by contemporary design.

"The Canvas project, as a whole, displays kaleidoscopic creativity, reflecting the diversity of the group based on cultural vision," said designer and curator, Jeffrey Bernett. "It is a testament to what happens when you present talent with a provocative opportunity, a blank canvas."

The work of Dutch artist and designer Christien Meindertsma is among the 19 pieces showcased at the exhibition, which opened yesterday. Her Pigeon Service installation pays homage to the homing pigeons used for espionage during the first world war.

Meindertsma failed to find the right textile when creating the elements for her installation, until she discovered Kvadrat's Canvas.

"Because the filling is just linseed, the shape comes entirely from the textile's sturdiness and slight stretch," said the designer, who has made the birds using every Canvas shade available.

Amsterdam-based interior design studio BCXSY is also in the mix of designers presenting at the exhibition. The studio's Catwalk Bench uses upholstery in an unconventional manner, exhibiting the Canvas textile as a revolving loop rather than as a stationary object.

Inspired by Ridolfo's references to haute couture in his creation of Canvas, BCXSY developed its revolving seat to evoke a manually operated conveyor belt. This assembly-line-like mechanism keeps the works' appearance in constant flux.

"Bit by bit, all the various colours of Canvas appear and move across the surface of the bench like a vivid fashion show, highlighting the tonal relationships and harmonies within the collection," the designers said.

Teruhiro Yanagihara approached the open brief from an interior design angle, using the fabric to adorn a set of modern, gravity-defying wall-mounted shelves.

The shelves, called Gravity, were made to look like pieces of artwork on the wall, even when not in use. A limp piece of Canvas material acts as an additional shelf that can be used to hold objects such as books.

"When the shelf is empty, the textile draws a naturally curved line," Yanagihara said. "When an object is placed onto the shelf, the line will change according to the shape of the object."

Other designs include a Lion Dance Costume by New York-based studio Chen Chen and Kai Williams, who used the textile to make a performance piece to be seen both in movement and as an artefact, and a woven bench by American designer Max Lipsey, who took advantage of the strength of the featured fabric.

My Canvas is the third display in a series of exhibitions by Kvadrat named Design Projects, which has previously seen the Danish company create installations alongside designers in Milan in 2012 and 2014.

The London exhibition will be on show at Somerset House until 24 September 2017 as part of this year's London Design Festival.

Kvadrat, which ranked at number 180 on the inaugural Dezeen Hot List, is one of the world's leading textile manufacturers. The company has previously collaborated with the likes of Raf Simons, Ronan and Erwan Bouroullec, Doshi Levien and Richard Hutten. 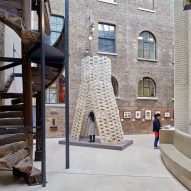