During a presentation in a warehouse on the outskirts of Paris yesterday, the Belgian designer presented a series of coats in fabrics from the new Kvadrat/Raf Simons range, set to launch in Tokyo this March. 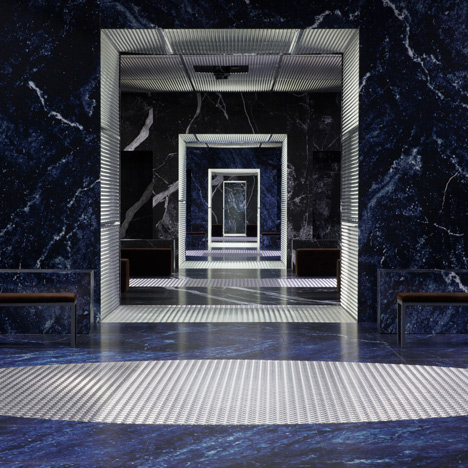 "So proud. New Raf Simons collection, 50 per cent of the coats made out of his new textile collection for us," said Njusja de Gier, Kvadrat's brand director, on Facebook.

The textured materials – initially created to upholster home furnishings – were cut into a range of outwear styles, including floor-length trenches, knee-length macs and cropped pea coats.

A selection of sleeveless coats with unfinished edges and elongated silhouettes were also created from the blue, grey and peach-coloured textiles.

On some of the garments, button and zip fastenings were replaced with belts in matching fabrics, worn tied around the waist or left to hang down at the sides.

The first Kvadrat/Raf Simons collaboration was launched in London last year, while the new collection is set to launch at an event in Tokyo on 25 March.

Other outerwear in Simons' menswear collection was graffitied with slogans and sketches, referencing the designer's school days.

White lab coats were scrawled with handwriting and cartoons, similar to doodles made in an exercise book.

Bird motifs patterned yellow, red and green knitwear, which provided pops of colour among the camel, navy and black tones.

Many outfits were layered over turtleneck jumpers and included oversized trousers that gathered around the ankles.

The collection was shown as part of Paris men's fashion week, which continues until Sunday. The festival follows other dedicated menswear events in London – which saw new collections by designers including Sibling and Christopher Raeburn – and Milan, where fashion house Prada presented earlier this week.