Patterns formed by overlapping forest canopies informed the shape of Tala's new LED lightbulb, billed as the largest of its kind in the world.

Tala launched the Voronoi III during this year's London Design Festival – using it to illuminate an exhibition space in Shoreditch, where the company was presenting its designs alongside furniture pieces by SCP.

It is the latest bulb in the London-based company's Voronoi range, following on from the I and II models. While it is similarly made from mouth-blown glass and an LED fitting, Tala claims the newest version is the "world's largest sculptural bulb" in production.

The design of the bulb is intended to recall tessellating patterns – or Voronoi – seen in overlapping forest canopies, and was developed by Tala over a year-long period.

The designers began by 3D-printing a series of Voronoi structures in resin, before smoothing down sharp lines to give the impression of natural erosion. This gave the guide for the mouth-blown glass structure.

Inside the bulb, a custom-built LED filament curves around a central column, and – again recalling nature – is based on pine cones and ferns found in forests.

"LED technology has enabled us to challenge the form of the light bulb and push the boundaries of mouth-blown glass for the first time," said Joe Armitage, Tala's design director.

Armitage, who is responsible for overseeing the design of all of Tala's products, also said the new bulb "encapsulates the future of LED lighting", and represents the brand's overall mission for producing quality products that have a "positive impact".

Tala was founded in 2015 by Joshua Ward, Maxwell Wood, William Symington and Ciaran Dawson, who met while they were studying at Edinburgh University.

The company describes its mission as being to "accelerate the low carbon economy", and they follow strict sustainability guidelines at each stage of the manufacturing process.

They also implement a programme named Ten Trees, which supports reforestation in the UK and USA, and sees 10 trees planted by the company for every 200 units sold. 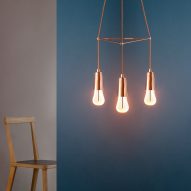 The Voronoi III was launched during this year's London Design Festival, which is taking place until 24 September 2017. Other products to launch at the festival include a range of silverware by Christopher Jenner, and a range of electronics accessories by Benjamin Hubert's new brand Nolii.