The organisers of Mexico City's annual design festival have pushed back the event as the city deals with the destruction caused by a severe earthquake last week.

Design Week Mexico will now take place 11 to 15 October 2017, giving the city an extra week to recover from the 7.1 magnitude quake that struck on 19 September 2017.

More than 300 people died, and many buildings in the city and surrounding area collapsed as a result of the tremor, which occurred on the anniversary of the 1985 earthquake that killed approximately 9,500 people in and around Mexico City.

A spokesperson for Design Week Mexico said that the organising team are all safe, and some have volunteered to help conduct building inspections across the city.

"Following the tragic events of September 19th, we extend our sympathy to all families and communities affected by the earthquake, in Mexico City and beyond," said a statement issued by organisers.

"In these difficult times, we are grateful for the incredible level of solidarity we have witnessed across the city and throughout the world," it continued. "Design Week Mexico's priority is to join relief efforts in affected areas in the city and across the country, including Chiapas, our Guest State of 2015, and Puebla, our Guest State of 2017."

On its website, Design Week Mexico also encouraged those affected by the earthquake and/or taking part in relief efforts to get in touch.

The epicentre of the 19 September quake was located 123 kilometres south-east of the capital, in Mexico's Puebla state. It followed an 8.1 magnitude seismic event on 8 September 2017, near the Pacific coast of Chiapas state, and resulted in 6.1 and 4.5 magnitude aftershocks in Oaxaca state on 23 September 2017.

Tragedy also hit Tokyo Design Week in 2016, when a child died and two adults were injured in a fire caused by an incandescent light bulb. The 2017 edition of the event was cancelled, with plans announced to relaunch the event next year. 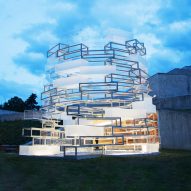