Dezeen is giving away five copies of Urban Potters: Makers in the City – a book by Katie Treggiden that documents the revival of ceramics in London, Copenhagen, New York, Sao Paulo and Tokyo.

This competition is now closed. Congratulations to the winners, which are Lisa Kosak from Berlin, Germany; Tom Jacobs from London, UK; Shane Weir from Mold, UK; Brian Minards from Harrogate, UK; and Edouard Godier from Angers, France.

Written by design journalist Katie Treggiden and published by Ludion, the book introduces 28 young ceramicists in their six respective cities – exploring their work, studios and inspiration.

The book also maps out the shift from the standardisation and mass-manufacturing of pottery, to the revived interest in handmade ceramics – which has seen Turner prize-winning Assemble "squish" coloured clays to create one-of-a-kind products, and Alissa Volchkova create porcelain bowls that look like paint blobs.

"In an age when we devote so much of our time to devouring digital information and imagery on screens, it's inevitable that the spontaneity of craftsmanship seems increasingly appealing," said Treggiden.

As well as giving insight into handmade ceramics into the various cities, the book also includes a practical source list of places to buy handmade pottery in the six cities featured.

"For each one, I have written an introductory essay telling just one of the many stories of pottery in that city and then profiled some of the most exciting contemporary studio potters working in each city today," she continued. "My hope in doing so is to tell a more inclusive story of clay, recognising the diversity of its craftsmen – and women."

Dezeen is giving away five copies of the book, which is also available to purchase on Amazon for £20.40. 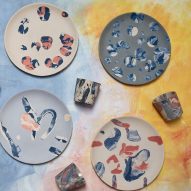