To "avoid the monotony of batch production", Turner Prize-winning architecture collective Assemble have developed a method for producing tableware items that are unique every time.

Called Splatware, the project is the latest offering from Liverpool-based social enterprise the Granby Workshop, which Assemble's 18 members launched shortly after finding out they had won one of the UK's most important art prizes.

Splatware goes on show later this month as part of the London Design Festival 2017. It features a range of marbled ceramics that are made by placing clay into plaster moulds.

Each product is created by combining different coloured clays that have been sprayed with ceramic oxides and pressed – or "squished", as Assemble's Lewis Jones puts it – using an industrial RAM Press.

"The act of making them is part of the creative process," Jones told Dezeen.  "The process needs to invite chance and accident in a way of making that, for the maker, is more interesting because you don't know how it's going to turn out."

This process introduces an element of chance to the production line – the squishing process can produce millions of different variations, so results in one-of-a-kind products that offer an alternative the uniformity of man-made items.

"We try to avoid the monotony of batch production, which also means that for the people buying the products, they're one of a kind," said Jones.

All of the past Granby Workshop projects – including "smoked" ceramic tiles and playful door knobs – have involved entirely hand-made products. The team started working with the RAM Press to speed up their manufacturing process, but are happy it still gives them creative freedom.

"The problem with that is that things are of a smaller scale and we're interested in how we can scale up that idea by playing with the machine," said Jones.

"It's challenging because you don't want the products to feel exclusive but they have to be priced fairly depending on how long they take to make, which is why we want to experiment with unorthodox processes and use tools of mass production in an innovative way."

The Granby Workshop is operated day-to-day by a group of residents in Liverpool's Toxteth area who have been trained by Assemble. They use local materials – many collected from the disused Victorian terraced houses in the Granby Street neighbourhood – to craft their range of homeware.

Splatware, which launched on Kickstarter this week, aims to connect the workshop to a broader group of people.

"The workshop is about trying to create a really good business, that is both a place of employment and a way to open up facilities and be a positive part of the ongoing area," added Jones.

"We are doing more external commissions now, and while a lot of the products are developed for uses in Granby, we supply them all over the world."

Assemble made history in 2015 when it became the first non-artist to win the Turner Prize.  The group of 18 artists and designers are best known for their public installations, which include a Brutalist-inspired playground and a temporary cinema constructed beneath a flyover.

The studio ranked at number 49 on the inaugural Dezeen Hot List. 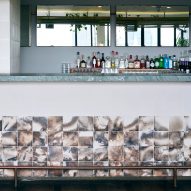 Assemble patterns ceramic tiles by baking them in a barbecue