Dezeen is giving five readers the opportunity to win a book documenting over a decade of work by American architecture studio Hughesumbanhowar Architects.

This competition is now closed. Congratulations to the winners, which are Megi Zeqo from Tiranë, Albania, Alan Wrighy from Nottingham, UK, Anthony Stoffella from California, USA, Jean-Valéry Ruchot from Verneuil-sur-Seine, France and John Lock from Worcestershire, UK.

The hardback book looks closely at 21 current and completed projects by HUUM, ranging from private residences, to commercial spaces and public buildings.

Each structure has been captured in colour photography, and is accompanied by a short description and architectural drawings that reveal details about the buildings' interiors.

Described by HUUM as its own "anthology", the book illustrates the practice's modern approach to design and the variety of commissions completed since it was founded in 2000. Italian architect Pierluigi Serraino has written the preface to the book, introducing this body of work.

Projects featured in the book include a seafront home in Florida called Beach Road 2, whose design was informed by materials typically found strewn along the coast, and Big Timber Riverside, a property which sits within a clearing of a 2,000 acre ranch in Montana.

The title also showcases projects that the practice is currently working on, such as a winemaking facility in the rural hills of northern Italy and an office building in south Florida whose plain white facade conceals a greenery-covered rear volume.

Hughesumbanhowar Architects: The Architecture of Scott Hughes and John Umbanhowar is also available to buy for $40.00 (£29.78) from HUUM's website.

HUUM is lead by Scott Hughes and John Umbanhowar. The practice operates across the east and west coast of America, with offices in California and Florida. 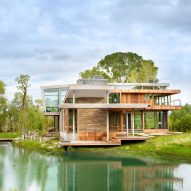 Montana house by HUUM sits beside the Yellowstone River