Ponds fed by the Yellowstone River provide natural water features around this home by Hughesumbanhower Architects, located on a ranch in Big Timber, Montana (+ slideshow).

Watershed Lodge sits in a clearing on the 2,000-acre (809-hectare) area of land, bisected by the river that fluctuates between a trickle and a torrent depending on the time of year.

To protect the house from flooding, Hughesumbanhower Architects (HUUM) raised the building on a 30-inch-high (72-centimetre) plinth that allows the swelling waters to flow underneath and around the concrete foundations.

"Other than the elevated driveway, the house will appear to float on the river as waters pass around and under the foundations," said the firm, which has offices in California and Florida.

The front door is reached along a low bridge over the water, from which visitors can take in views of the nearby mountains known as the Crazies.

"The environs recall the unexploited American West of a century ago," said HUUM.

The 3,800-square-foot (353-square-metre) home comprises two distinct sections that form a T-shape, with the entrance located where they intersect.

"The house presents two distinct and separate facades on arrival, revealing itself after the visitor enters as two interlocking objects," HUUM said, "one, a two-level glass wedge, the other a one-storey wooden bar."

Along the north-south axis, the single-storey timber-clad volume contains two bedrooms, bathrooms, a kitchen and a family room. 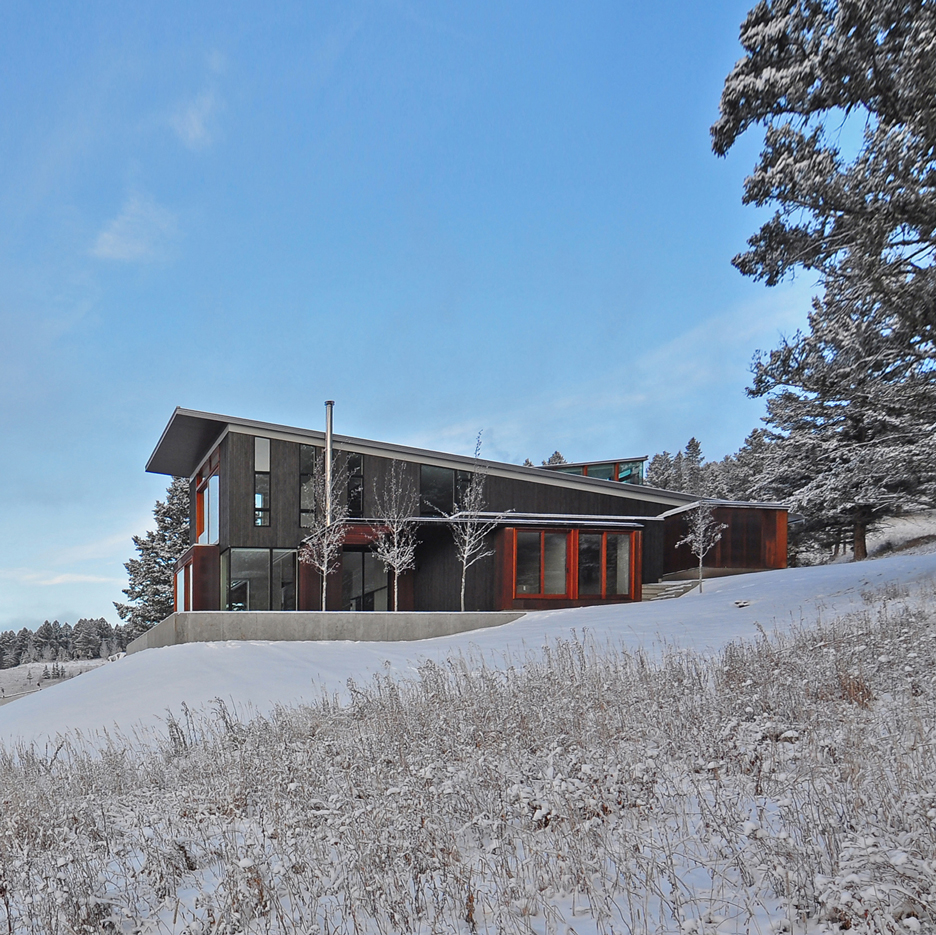 A garage is situated at the southern end, while a covered terrace caps the northerly tip.

All of these spaces are connected by a corridor on the western edge, which is intended to "recall the scale and function of the shed-covered walkways in former frontier towns".

In the shorter, perpendicular volume is an open-plan living area that offers a variety of seating options and has glazing on three sides.

A staircase that doglegs around a void above the entrance hall leads up to the master suite.

At the top of the stairs, bathing and dressing areas are passed through before reaching the bedroom, which has expansive views of the landscape through floor-to-ceiling windows.

In front of the bed is a feature fireplace, in a curvaceous metal shell this is suspended from the ceiling and hovers above the floor.

Two more fireplaces can be found in the house – one separating the entrance hall and the main living area, and another between the family room and the covered terrace.

The first has a chunky rectangular flue that stop short of the pit for burning wood directly below, while the second sits in a more traditional stone surround.

A mixture of reclaimed wood, white surfaces, and limestone and timber flooring contributes to a light and airy feeling throughout the property.

Similar large residences are peppered across the dramatic landscape of the American West. Examples in nearby Wyoming include a vacation estate for a New York family and a home that wraps around a giant boulder – both designed by Carmody Logan Burke.